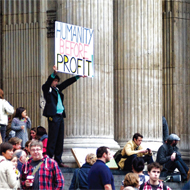 Third Sector organisations associated with welfare, care and justice have become a significant element in the contemporary political and ethical
landscape. These include a notable segment that is faithmotivated and founded on attempts to practice and perform theo-ethics. Far from simply being co-opted into neoliberal ideology and subject-formation, these organisations can represent spaces of resistance to neoliberalism. Moreover, in the possibility of establishing practical partnerships of postsecular rapprochement between different faith-related and non-religious groups, these ethical spaces can, I argue, become hopeful spaces of collaborative care and empowerment. In this way, postsecularism may be understood not as an epochal shift in the relations between the secular and the religious, but (following Klaus Eder and Jurgen Habermas) as a process by which the “hushed up voice of religion” in the public sphere is being heard again within specific postsecular technologies and spaces of reflexive ethical translation and
crossover ethical narratives.

Paul Cloke is Professor of Human Geography at the University of Exeter, having previously held Chairs at the University of Bristol and University of Wales. Over the last decade he has been involved in collaborative research into ethical geographies, focusing in particular on responses to homelessness, the new politics of ethical consumption and the growing significance of faith-based or theo-ethics in contemporary society. He is currently engaged in research on postsecularism and faith-based interventions in a range of welfare and justice arenas. His latest books include: Swept Up Lives? Reenvisioning the Homeless City (Wiley-Blackwell, 2010, with Jon May and Sarah Johnsen); Globalising Responsibility: The Political Rationalities of Ethical Consumption (Wiley-Blackwell, 2011, with Clive Barnett, Nick Clarke and Alice Malpass) and Faith-based Organisations and Social Exclusion in European Cities (Policy Press, 2012, with Justin Beaumont)

The School of Geography at Queen Mary The School of Geography is internationally recognized as a centre of excellence in teaching (graded ‘excellent’ in the Government’s Teaching Quality Assessment programme) and for its theoretically-informed, empirically-grounded and politically-engaged research. It was ranked joint first in the 2008 Research Assessment Exercise, with three-quarters of its research ranked as world-leading/internationally excellent. It is one of the UK’s top Geography departments.

Queen Mary, University of London Queen Mary, University of London is one of London and the UK's leading research-focused higher education institutions. Amongst the largest of the colleges of the University of London, Queen Mary's 3,000 staff deliver world class degree programmes and research across a wide range of subjects in Humanities, Social Sciences and Laws, in Medicine and Dentistry and in Science and Engineering. Queen Mary was ranked 13th in the UK in the 2008 Research Assessment Exercise (RAE) according to the Times Higher Education. Our staff members have been honoured by election to Fellowships of the Royal Society, the British Academy, the Royal Academy of Medical Science and the Royal Academy of Engineering.

To make a booking for this free event email:a.tan@qmul.ac.uk