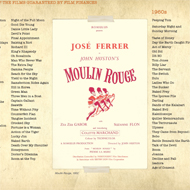 Queen Mary's Living British Cinema forum is hosting an introduction to the private archive of the completion guarantee company Film Finances, which contains scripts, progress reports and production correspondence relating to over 600 British features made between 1950 and 1980, including many of the most famous titles of post-war cinema history, such as "The African Queen", "Peeping Tom", "Zulu", "The Servant", "Dr No", "The Ipcress File", "Cabaret", "Don't Look Now", etc. The speakers will include film historian Charles Drazin and the team of archivists who are compiling an inventory of the archive: Schuyler Ransohoff, Olivia Parkes and Wesley Fleuchaus.

The afternoon will be an opportunity to sample a treasure-trove of primary material relating to the post-war British cinema, to learn about one of the film industry's most significant although little-known companies, and to contribute to a debate on the future of this extraordinary resource.