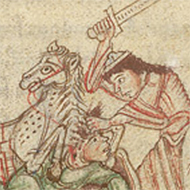 This lecture addresses Christianity’s two central technologies of the self—technologies which occasionally intersected but normally competed in their aspiration to probe motivations and actions. Each system suspects the other: the sacrament of penance tries to delimit conscience, which it regards as a dangerous free-lancer; conscience would act independently but proves liable to err when it stands on its own. Laid bare in this lecture are some of the tensions which culminate in the sixteenth-century Reformation. Texts to be considered include Piers Plowman, Jacob’s Well and Calvin’s Institution of the Christian Religion. Paul Strohm is Leverhulme Visiting Professor at Queen Mary, University of London, for Winter- Spring 2012. He was previously Anna Garbedian Professor of the Humanities at Columbia University and J.R.R. Tolkien Professor of English Language and Literature at the University of Oxford. He is author of a half-dozen books on medieval literature, history, and culture including Social Chaucer (Harvard, 1989), England’s Empty Throne (Yale, 1998), Theory and the Premodern Text (Minnesota, 2002) and, most recently, Conscience: A Very Short Introduction (Oxford 2011).