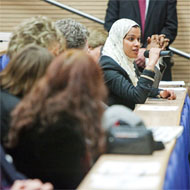 ISLAM and the WEST Forum
What can the West do about Syria?

After more than a year of protest and violence, and over 10,000 deaths, the Syrian crisis looks no nearer to an end. Unlike in Egypt and Tunisia, the ruling regime of President Bashar al-Assad appears entrenched and unlikely to fall anytime soon, while the opposition has shown itself to be determined, if militarily weak, in the face of near-constant repression.

With the deadlock hard to break and civil war looking ever more likely, this panel considers what, if anything, can the West do to help bring about a solution in this key state in the Arab and Muslim world? Despite western reluctance for another Middle Eastern military campaign, should a military option against Assad, similar to that employed by NATO in Libya, be seriously considered? Alternatively, is there any circumstance in which the West would engage with Syria while Assad remains in power? Are the West's current policies of diplomatic and economic sanctions having any impact, or are they hurting the people rather than the regime? With a panel of activists - both for and against the regime - alongside policy makers and regional experts, this forum will debate and discuss such key issues and will the open the floor for questions.

COME TO DEBATE ONE OF THE WORLD’S MOST PRESSING ISSUES
www.islamandthewest.qmul.ac.uk