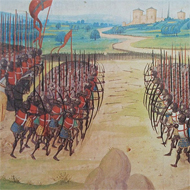 In an increasingly secular age religion remains a key element at the heart of war. Soldiers in modern armies as well as those in previous ages are supported by military chaplains. The experiences of men in medieval battles such as the Battle of Agincourt deepen our understanding of how soldiers through the generations faced and continue to face the challenges and terrors of war.

Virginia Davis is Dean for Research in the Faculty for Humanities and Social Science and Professor of Medieval History. Her academic interests centre on the history of the medieval church and its relationship with society. She has a longstanding interest in developing digital resources to support research into medieval ecclesiastical history, work which resulted in the publication of a major database of medieval London ordination records. Her most recent book is William Wykeham: A Life (2008).

To attend this lecture please click BOOK NOW at the top of this page.

For a map and directions to the Drapers' Lecture Theatre please follow this link: Map & Directions.