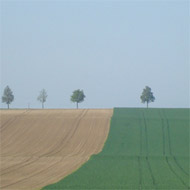 The Harvesting of Light by Nature

The capture of light energy by photosynthetic organisms is a global process with an efficiency reaching 80 - 100%. This lecture will introduce the organisation of a natural light harvesting nanostructure - the antenna of the photosystem II of higher plants. It will explain the key principles of its design, robustness and flexibility, examples of how nature utilises the fundamentals of physics and chemistry to achieve its goal – efficient and safe light harvesting.

Alexander Ruban obtained his PhD from the Institute of Photobiology in Minsk, Belorussia 1987 and worked until 1990 in the Institute of Plant Physiology in Kiev, Ukraine. In 1990 he received a British Council Scholarship to work at the University of Sheffield for a year and at the end of this term was appointed as a research associate at the Department of Molecular Biology and Biotechnology. In 2000 he was awarded the qualification of a University Professor in France. In 2002-2004 he was an invited professor at the École Normale Supérieure in Paris. Since 2006 he has been working in SBCS at Queen Mary University of London as a Lecturer in Biological Chemistry and from 2009 was awarded a title of Reader in Biophysics and in 2010 – Professor in Biophysics. His area of research is photosynthetic light harvesting. He was one of the initiators of the two European networks that focused on studies of the processes and molecular mechanisms of light harvesting and photoprotection in plants.