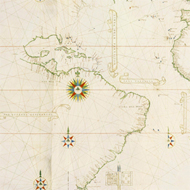 News of the World: Mapping the Earth in an Age of Globalisation

At a time when the online industry is locked in a battle over dominance of virtual geospatial applications, this lecture will situate the current ‘map wars’ within a wider historical and cultural context. Ranging from the Greeks to Google Earth, it examines how the globe has been mapped by different cultures over time, and what this means for our current understanding of globalisation. Far from being purely scientific objects, world maps
appear to be unavoidably partial and subjective, intimately bound up with the systems of power, authority and creativity of particular moments and places. But if the paper map is a subjective thing of the past, then what of the map’s future, and how will we map the world around us?

Jerry Brotton is Professor of Renaissance Studies in the Department of English at Queen Mary, University of London. He is the author of numerous books, including Trading Territories (1997), Global Interests (2000, co-written with Lisa Jardine), The Renaissance Bazaar (2002), The Sale of the Late King’s Goods (2006), and A History of the World in Twelve Maps (2012). He presented BBC4’s three-part television series, ‘Maps: Power, Plunder and Possession’ (2010), and co-curated the internationally acclaimed exhibition ‘Penelope’s Labour: Weaving Words and Images’, at the
Venice Biennale (2011). He is internationally recognised as an expert in the history of cartography and east-west cultural exchange in the early modern period.

A Reception and book launch will follow the lecture, generously supported by Penguin Books