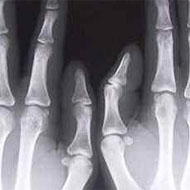 ‘If you cannot get rid of the family skeleton, you may as well make it dance’ said George Bernard Shaw. Or, in 2011, study it to understand how the interaction of genes, hormones and the environment achieve growth and maturation of bones and other important tissues. In this lecture, Professor Drake will use examples of extreme clinical syndromes - including rickets in sub-Saharan African children, cases of a rare form of skeletal dysplasia, severe hypopituitarism and growth hormone excess - to explore mechanisms of skeletal development and show how a greater understanding may facilitate the development of therapies for a variety of conditions in which those mechanisms go wrong. Professor Drake grew up in Lincolnshire and studied medicine at Christ Church, Oxford and the Royal London Hospital Medical College. After junior jobs at St Bartholomew’s Hospital, he spent a year at Groote Schuur Hospital, Cape Town before returning to the UK to take his MRCP and train in Endocrinology, including a research fellowship. Following a year as a Clinical Fellow at the University of British Columbia, Vancouver, he returned to the UK and has been a Consultant Physician at Barts and the London since February 2004. He was awarded a Readership in Medicine in 2006, FRCP in 2007 and made Professor of Clinical Endocrinology in August 2010. His backhand volley remains unsatisfactory, he cannot read legspin or play reverse swing and is getting worse, rather than better, at mogul ski-ing.