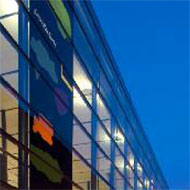 ATP Binding Cassette transporters are integral membrane proteins that export solutes across cellular membranes. There are more than 40 ABC transporters in humans and their dysfunction is known to cause at least 26 different diseases. Understanding how these transporters work has been a major research interest of Professor Linton over
the last 15 years. In his talk he will describe the scientific and career choices that led him to the Blizard Institute.
Kenneth Linton was awarded a BSc (Hons) in Microbiology from Edinburgh University in 1985 and a PhD from Glasgow University in 1989 for the molecular genetic analysis of antibiotic production and resistance in soil bacteria. Postdoctoral studies at the University of Wisconsin (Madison) resulted in the cloning of the genes involved in
deoxy-sugar biosynthesis (necessary for erythromycin biosynthesis). A return to the UK in 1993 (Oxford University) saw a return to the field of drug resistance; this time drug resistance in humans, mediated by the ABC transporter, P-glycoprotein. He moved to the MRC Clinical Sciences Centre at Imperial College (Hammersmith Hospital campus) in 1999 where, ultimately, he became Reader in Protein Biochemistry and leader of the Membrane Transport Biology group. In the summer of 2009 he moved east to take up his current post..

If you wish to attend this event please email smd-inaugurals@qmul.ac.uk