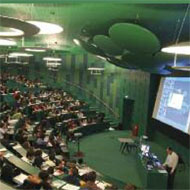 Everybody has heard of hormones but not all hormones are equally familiar. The adrenal steroid hormone, DHEA, was the cure-all of the late 20th and early 21st century. Banned from sale in the UK but widely available online, DHEA was claimed to have spectacular anti-aging effects. Horns will feature in a consideration of some more unusual medical practises. Professor Joy Hinson graduated from QMC in 1981, joining St Bartholomew's Hospital Medical School, initially as a PhD student. Over the past 30 years Joy has moved from Charterhouse Square to Mile End and then to Whitechapel. She spent most of that time researching adrenal hormones. In 2006 she became Dean for Postgraduate and Postdoctoral Studies but remains an endocrinologist at heart, teaching on hormones and having co-authored 'The Endocrine System'. Her latest interest is goats.