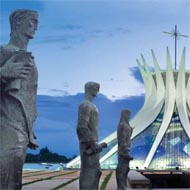 This lecture will explore ways in which film-makers have projected Rio de Janeiro, São Paulo, Brasília and Salvador as Brazilian cinematic cities par excellence. Visual representations of social mobility, class encounters and cultural conflicts as well as projections of urban utopias offer alternatives to images of exoticism, spectacle and violence. The lecture will also consider ambiguity in Rio´s status as both colony and seat of the Portuguese Monarchy in the 19th century and in São Paulo as the financial epicentre of Brazil as an emerging global power.

Else Vieira is Professor of Brazilian and Comparative Latin American Studies at Queen Mary University of London where she helped launch the new programme in Brazilian and Lusophone Studies. She co-ordinates Portuguese, upgraded as a degree-level language in 2009. She was previously the Chairwoman of Graduate Studies  in Comparative Literature at the Federal University of Minas Gerais, Brazil, before her Visiting Professor ship at the Universities of  Oxford and Nottingham. She was appointed to Queen Mary in 2002. In 2010, arising from her outreach activities for the preservation of Portuguese amongst Lusophone UK residents, she was invited by UNESCO to represent the world’s Portuguese speakers in the International Year of the Mother Tongue and the Rapprochement of Cultures. She was also elected interlocutor between Brazilians in Europe and the country’s Presidency and Ministries.

See also - Map and directions to this venue