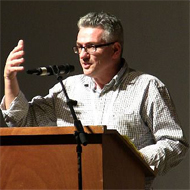 The lecture will explore the phenomenon of globalizing “fast policy,” a form of contemporary policy development characterized by accelerated, transnational emulation and by continuous, multi-site mutation. The post-financial crisis reinvention of neoliberalism, as the prevailing form of market-oriented governance, provides the context for the analysis, both conceptually and historically. Contemporary forms of neoliberalization, it is argued, are being realized and reproduced through historically distinctive processes of fast policy formation. This calls for new forms of critical policy analysis, specifically concerned with the construction, circulation, and contradictions of rapidly diffusing policy norms, models, and practices. This “policy mobilities” approach is exemplified by way of a comparative analysis of two fast-moving policy innovations, both of which are associated with “silver bullet” policy models, and both of which have traveled “up hill,” from the global South to the global North: participatory budgeting (PB) and conditional cash transfers (CCTs). Both policies originated in Latin America in the 1990s, but have since been widely propagated around the world. They are also positioned, in historical terms and maybe also as policy rationalities, at the edges or “limits” of neoliberalization. Jamie Peck is Canada Research Chair in Urban & Regional Political Economy and Professor of Geography at the University of British Columbia, Canada. The recipient of Guggenheim and Harkness fellowships, he was previously Professor of Geography & Sociology at the University of Wisconsin-Madison and Professor of Geography at the University of Manchester, and has held visiting positions at Johns Hopkins, the National University of Singapore, University of the Witwatersrand, the University of Melbourne, the University of Amsterdam, the University of Oslo, and Queen’s Belfast. Jamie Peck’s research interests include the political economy of neoliberalization, the politics of policy formation and mobility, economic governance, labor market theory and policy, and urban restructuring. His publications include Constructions of neoliberal reason (2010), Contesting neoliberalism: urban frontiers (2007, coedited with Helga Leitner & Eric Sheppard), Workfare states (2001), Work-place: the social regulation of labor markets (1996), and the forthcoming Wiley- Blackwell Companion to Economic Geography (2012, coedited with Trevor Barnes & Eric Sheppard). His current research is concerned with the reproduction of transnational policy norms and questions of metropolitan governance. The School of Geography at Queen Mary The School of Geography is internationally recognized as a centre of excellence in teaching (graded ‘excellent’ in the Government’s Teaching Quality Assessment programme) and for its theoretically-informed, empirically-grounded and politicallyengaged research. It was ranked joint first in the 2008 Research Assessment Exercise, with three-quarters of its research ranked as world-leading/internationally excellent. It is one of the UK’s top Geography departments. Queen Mary, University of London Queen Mary, University of London is one of London and the UK’s leading research-focused higher education institutions. Amongst the largest of the colleges of the University of London, Queen Mary’s 3,000 staff deliver world class degree programmes and research across a wide range of subjects in Humanities, Social Sciences and Laws, in Medicine and Dentistry and in Science and Engineering. Queen Mary was ranked 13th in the UK in the 2008 Research Assessment Exercise (RAE) according to the Times Higher Education. Our staff members have been honoured by election to Fellowships of the Royal Society, the British Academy, the Royal Academy of Medical Science and the Royal Academy of Engineering.