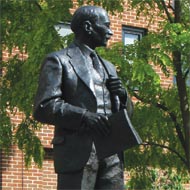 This event is now fully booked as we have reached the capacity of the lecture theatre. All those who made a booking before Friday 25 March will have confirmation emails and e-tickets sent to them from Wednesday 30 March.

If you would like to be placed on a waiting list for tickets, please email your details to events@qmul.ac.uk.

A lecture by Lord Hennessy, Attlee Professor of Contemporary History at Queen Mary, University of London and unveiling of the relocated statue by Lord Mandelson.

In July 1945 Clement Attlee was present at the election count in the Great Hall of the People’s Palace, now part of Queen Mary, when he learned that his party had won sufficient seats in parliament to form the first post-war government.

The statue was created by Frank Forster and was originally unveiled in Limehouse by Lord Wilson of Rievaulx in 1988. It was supported by the GLC and Tower Hamlets Council and sponsored by Dan and Lily Frankel. The relocation and repair of the statue in 2010 was funded by Queen Mary, University of London and facilitated by the London Borough of Tower Hamlets from which it is now on long term loan.

This event is being hosted jointly by Queen Mary, University of London, The Mile End Group and London Borough of Tower Hamlets.

Booking for this event is essential - please click BOOK NOW at the top of this page to reserve your place.