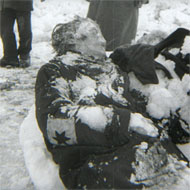 The 1945 images of the camps taken by British and American newsreel cameramen are usually seen as the first films of the Holocaust. This lecture examines footage of Nazi atrocities in Russia and Ukraine dating from 1941, recorded for Soviet newsreels and documentary films, and argues that despite them not being originally described as such, these images form the very first cinematic representations of the Nazis' attempted genocide of the Jewish people.  An analysis of these films forces a reassessment of our understanding of the filmic representation of the Holocaust.

Dr Jeremy Hicks is Senior Lecturer in Russian in the School of Languages, Linguistics and Film at Queen Mary, University of London.

If you would like to attend this event please click the BOOK NOW button at the top of this page.