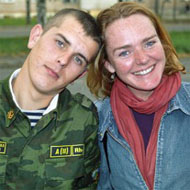 In 1990 Granada Television filmed seven-year-olds all over the Soviet Union. They wore Lenin badges and knew nothing of life beyond the Iron Curtain. Seven years later, they were hitting adolescence as their country was exploring new freedoms under Yeltsin. In 2004 they turned 21 and were making their way in an uncertain world that had undergone historic change. After the screening, Jemma Jupp, co-producer and co-writer of the scenario will be discussing the process of making this and the other films in this unique and ongoing series of '7up' films.