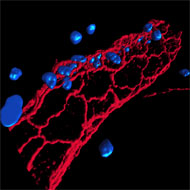 The migration of leukocytes into inflamed or injured tissues is a vital immune response but is also a major underlying cause of numerous pathologies such as stroke and atherosclerosis. Professor Nourshargh’s career has developed during a phase where there has been an explosive progress in unravelling of complexities associated with mechanisms of leukocyte migration. The lecture will describe the advancement and current status of the field and how continued research in this area promises developments of novel therapeutics aimed at
the treatment of acute and chronic inflammatory conditions.

Sussan Nourshargh graduated in Pharmacology at University College London, obtained a PhD in Pharmacology from King's College London and in 1988 joined the National Heart and Lung Institute (NHLI) in London as a Lecturer. In 1990 she was awarded a Wellcome Trust Career Fellowship followed in 1996 by a Wellcome Trust University Award, with the latter leading to a tenured academic position within NHLI at Imperial College London where in 2006 she was awarded a personal chair. In 2007 Sussan Nourshargh relocated to Barts and The London School of Medicine and Dentistry where she was appointed to establish and head a new Centre within the William Harvey Research Institute focussing on Microvascular Research.

If you would like to attend this event, please email your RSVP to: smd-inaugurals@qmul.ac.uk

For a map and directions to the venue please click here.