New book: The Juridification of Individual Sanctions and the Politics of EU Law 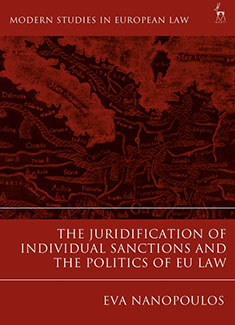 Dr Eva Nanopoulos, Lecturer in Law and Co-Director of the Centre for Law and Society in a Global Context (CLSGC) at Queen Mary University of London (QMUL), has published a critical study of EU sanctions. The book is titled The Juridification of Individual Sanctions and the Politics of EU Law (Hart 2019)

In the early 1990s the then European Community imposed for the first time a set of economic restrictions against a specific entity: the National Union for the Total Independence of Angola. Since then, the individualisation of sanctions has become entrenched, these so-called 'smart' sanctions have proliferated, their targets and scope of application have significantly expanded, and they operate in an increasingly juridified environment. This book aims to shed light on the constitutive dynamics and causes of these developments, with a focus on the juridification of individual sanctions at the European level. To this end it first revisits the phenomenon of individualisation – moving beyond the conventional narrative that individual sanctions emerged because of humanitarian and effectiveness concerns – and situates the 'smarting' of sanctions within the context of broader structural transformations characterised by the consolidation of the global neoliberal order. Second, the book explores why the role of law has been so pronounced in the European context by unearthing the connections between EU law and capitalist order building.