The Centre for Law and Society in a Global Context is delighted to host a book symposium on our deputy-director's Dr Noam Gur's new book, Legal Directives and Practical Reasons.

Dr Gur will introduce the book, and this will be followed by three comments from:

The event has been organised by Dr Maks Del Mar, and will be chaired by Dr Isobel Roele. 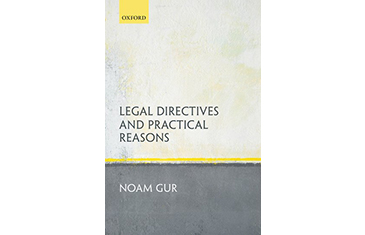 This book investigates law's interaction with practical reasons. What difference can legal requirements-e.g. traffic rules, tax laws, or work safety regulations-make to normative reasons relevant to our action? Do they give reasons for action that should be weighed among all other reasons? Or can they, instead, exclude and take the place of some other reasons? The book critically examines some of the existing answers and puts forward an alternative understanding of law's interaction with practical reasons.

At the outset, two competing positions are pitted against each other: Joseph Raz's view that (legitimate) legal authorities have pre-emptive force, namely that they give reasons for action that exclude some other reasons; and an antithesis, according to which law-making institutions (even those that meet prerequisites of legitimacy) can at most provide us with reasons that compete in weight with opposing reasons for action. These two positions are examined from several perspectives, such as justified disobedience cases, law's conduct-guiding function in contexts of bounded rationality, and the phenomenology associated with authority.

It is found that, although each of the above positions offers insight into the conundrum at hand, both suffer from significant flaws. These observations form the basis on which an alternative position is put forward and defended. According to this position, the existence of a reasonably just and well-functioning legal system constitutes a reason that fits neither into a model of ordinary reasons for action nor into a pre-emptive paradigm-it constitutes a reason to adopt an (overridable) disposition that inclines its possessor towards compliance with the system's requirements.

Noam Gur is a lecturer in law at Queen Mary University of London. He specializes in jurisprudence and legal theory, and has further research interests in political theory and in tort law. He previously held a post-doctoral position at the University of Oxford, where he also earned his doctorate and master's degrees in law. He obtained his first degree in law from the Hebrew University of Jerusalem, after which he clerked at the Supreme Court of Israel and worked as a lawyer in a private firm.