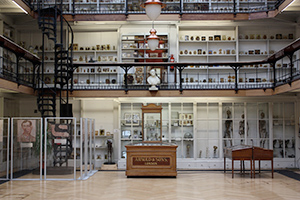 Barts Pathology Museum is based in the grounds of St Bartholomews Hospital at West Smithfield and houses over 4,000 medical specimens on display over 3 mezzanine levels of the Victorian museum. The museum holds a further 1000 specimens in store along with another 800 that are dedicated to anatomy teaching. Together, this makes it one of the largest collections of human pathological specimens in the country.

Prior to the appointment of the current Technical Curator, Barts Pathology Museum was in a very poor state. As medical teaching methodology changed post World War 2, the need for pathological specimens to study anatomy and pathology declined. By the late 1990's this had all but ended and the collection was left untouched for several years.

Without funding the specimens and the infrastructure of the building suffered and it wasn't until 2010 that a donation was secured to renovate the collection. Grant funding was provided by The Medical College of Saint Bartholomew's Hospital Trustees, a registered charity that promotes and advances medical and dental education and research at Barts and The London School of Medicine and Dentistry. As conservation of the collection progressed a trial was conducted to evaluate public interest in the collection. This was initially a series of academic presentations but soon expanded to become very popular evening seminars, workshops in taxidermy and cultural presntations. Public interest has been significant and this has led to the development of a Public Engagement stategy .

The museum is not open daily but only for special events and by appointment.

The best way to enter the hospital grounds is by the main Henry VIII Gate on West Smithfield. Enter through the gate and turn to your right.  Look for the Robin Brook Building and continue via the open doorway which says "No Access to Outpatients". On the right are the lift and stairs. Take either to the third floor.

How to find the Pathology Museum [PDF 576KB]

During our special events, the museum can be accessed via a lift which takes you to the third floor. However, there are still 7 steps which lead into the museum so it is not ideal for disabled access. We are working on that at the moment so please bear with us.

There is no on-site parking, and the nearest public car park is the NCP car park on Long Lane, West Smithfield.

The closest tube stations are Barbican, Farringdon and St Paul’s.