The Pathology Museum is really more of a co-operative of people who are passionate about the space and collection. Here is an introduction to the team employed by Queen Mary University of London.

I was appointed to this role in 2016 to champion the administration and development of the pathology museum at Barts and The London.

I chaired the QMUL Athena Swan project from 2010-2012 and before that was Dean for Student Affairs in the School of Medicine and Dentistry from 1998-2008.  I was consultant haematologist at Barts and The London for 30 years, my main interest being in the field of haemostasis and thrombosis.  I am a Past President of Barts and The London Alumni Association.

At retirement in 2008 I was appointed Honorary Professor at QMUL and was awarded the Queen Mary Medal in 2012.

I continue to support the museum as Director, and use my experience to guide the objectives of the museum’s five-year plan. 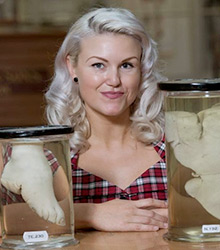 Carla Valentine is the only full-time member of staff based at the museum and her official title is Assistant Technical Curator. This means that Carla's job is to repair, conserve and catalogue all 5000 specimens and rearrange them in a way that satisfies the Human Tissue Authority as well as students and allied health professionals.

The events she organises originally came as a side project to entertain and educate as well as raise much needed funds - the team felt that once the ground floor conservation was completed it might be nice to see if people would like to attend events, despite limitations on the upper floors.

Carla is a fully qualified Anatomical Pathology Technician which means she worked in a mortuary, doing post-mortems, for eight years after studying Forensics and Microbiology at university. She also exhumed skeletons in Venice and Belgium as part of a Forensic Pathology MSc and worked on the deceased during the London Bombings 7/7.

In her spare time Carla writes for magazines and is now writing a book about the collection. You can see more information about her articles and experience on side projects such as Eat Your Heart Out on her website

Dr. Robin Poston was appointed curator in 2018. Further information will be made available soon, meanwhile please email bartspathology@qmul.ac.uk if you wish to know more and we will reply by email. 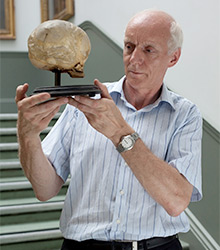 Steve Moore is the Learning Resources & Facilities Manager for the Student Office of the SMD (School of Medicine and Dentistry). He oversees the dissection rooms at Mile End as well as the Pathology collections here at Barts and at Whitechapel meaning he has a lot to do!
Without Steve's tenacity and relentless funding applications, a salary for a conservator would never have been secured and the doors to Barts Pathology Museum would still be locked to the public.