Originally opened in 1887 by Queen Victoria, the People’s Palace was built to provide cultural activities to the people of east London.

By the 1880s, the south of London has the Crystal Palace, the north had Alexandra Palace, and the west Earl's Court along with 'theatre land' in the West End. But what for the East End? The People’s Palace brought culture, entertainment and education to enrich the lives of the local people; more prosaically, it was a distraction from the gin-palaces of the day. Entertainment included everything from donkey and art shows, to dances and large scale concerts.

In the early hours of February 26 1931, the Queen’s Hall was completely destroyed by a devastating fire. Undeterred, the palace was rebuilt and reopened by King George VI and Queen Mary in a grand ceremony in 1937 in its current location, adjacent to the Queens’ Building. Since then it has been a staple venue in the activities of QMUL, playing host to Graduation ceremonies, formal dances and lectures.

The building was built of Portland Stone and red brick in art-deco style with its imposing façade featuring reliefs by Eric Gill –a striking addition to Mile End Road.

In keeping with the spirit and purpose of the original Palace, it was built as a theatre, cinema and music hall and was run successfully on that basis for a number of years. But following a decline in revenues the Queen Mary purchased the Palace in 1954. 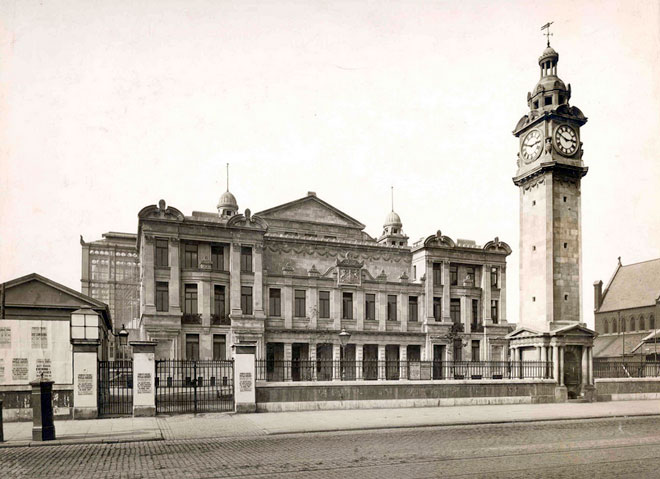 Completed in September 2012, the latest refurbishments are the most sympathetic of the various restoration schemes. Their purpose was to restore historic elements of the recently Grade II listed building as well as to make it more comfortable, with up-to-date sound, lighting, audio-visual and theatre systems.

In the Great Hall, the original 1930s colour scheme was discovered under layers of paint that had built up over the years, and was recreated. The Hall's wooden floorboards have been cleaned and, using old photographs, the decorative lantern in centre of the hall has been recreated. The Grade II* listed Rutt pipe organ - one of the best examples of its type - has been restored and the old projection room high up in the roof has been returned to use.

But the works have been about more than a faithful restoration of the Great Hall. The building's infrastructure has received a much-needed upgrade. New automatic cooling and ventilation systems have been introduced to cope with the heat produced by the Hall's 770-capacity audience. In addition, new theatre lighting and audio-visual systems have been installed, as well as retractable 'bleacher' style seating. 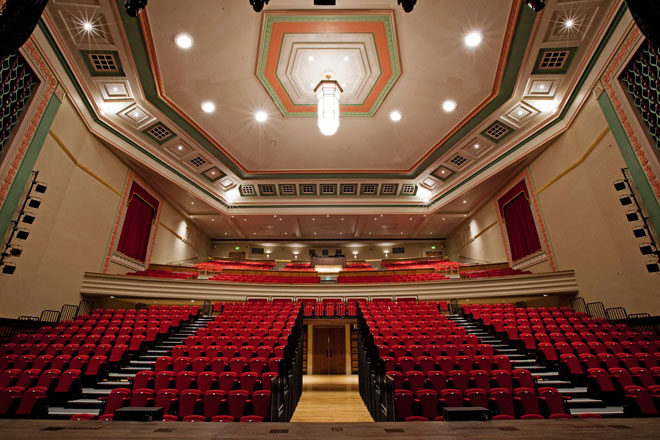 Originally opened in 1887 by Queen Victoria