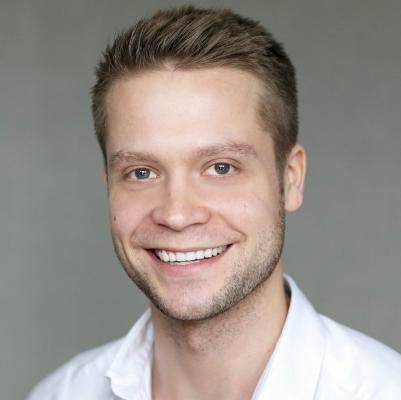 Growing up in Leeds James Bowers had always hoped that one day he would be able to study and work in France. As a young scientist, he enrolled on a PhD at the French Natural History Museum in Paris.

Over his four years there, he researched the link between ageing and metabolism as a Marie Curie fellow, before making the transition from PhD to SciComm Consultant and Coach. Knowing that making connections would be essential to succeed, James tells us how he adapted his networking style to fit around his shy personality.

What did you hope for in terms of employment/career as you completed your PhD?

Back when I started my PhD, I was convinced that I would go down the expected career path; do a postdoc and become a researcher. By the end, my plan had completely changed! I was definitely ready to find something else. Communication felt like the right direction. I had enjoyed doing FAMELab (similar to the 3 Minute Thesis competition) and made a video about my research with MyScienceWork. These experiences helped me realise that what I enjoyed the most in my PhD was presenting my research, talking about it with other people and was fast developing a taste for making science videos.

What was your first post-PhD job? /first thing you did after PhD (e.g. masters!)

My initial plan was to apply for jobs as a Science Communications Officer. It wasn’t necessarily exactly what I wanted but I knew other people who had managed to go straight from a PhD into SciComm that way. Although I considered myself bilingual, my written French was a barrier to me securing a position here, so my plans of SciComm en français didn’t initially work out. Battling on, I tried everything I could to keep going, leading me further into media. I started making videos and registered on an MSc course in Science Media Production at Imperial with a bursary from the Wellcome Trust. Just before moving back to London to do it, I got cast as one of the resident science explainers on a French version of an English science show called ‘Duck Quacks Don’t Echo’ (Sky One). They basically film celebrities doing weird experiments and needed a scientist to explain the facts. So, totally unplanned, I ended up getting stuck into a TV gig just before my masters.

How did you get your current job as a SciComms consultant at Agent Majeur?

After the masters I stayed in London, working as a TV researcher. Whilst it was a fun job, I eventually grew out of it. The production ladder is tough anyway and I found that my PhD had zero value in the TV world! That was pretty frustrating after all of my hard work. The sum of those parts lead me to a fork in the road. I spotted a consultant vacancy advertised at Agent Majeur. The role felt perfect as it required a PhD and I saw potential to apply my SciComm and media experience. I put together a great application but was turned down after interview. I later found out that it was due to my language again. Nevertheless, I was 3rd or 4th on their list. A few months later I got a call back asking me if I wanted the job as the other candidates hadn’t worked out - and the rest is history!

What do you do now?

In my role at Agent Majeur, I’m involved in all different types of projects, which are a mixture of three things: consulting (helping companies come up with communications strategies and campaigns), production (making videos, writing or translating articles and running events) and training (delivering courses in public speaking and writing). Our clients all work in R&D and come from the public, private and third sectors. They include universities, charitable foundations or companies from across French-speaking Europe - France, Belgium, Luxembourg, Switzerland - and sometimes further afield in Germany and Holland. Most science PhDs will have heard of the L’Oreal Women in Science initiative, we manage their communications campaign across the whole of France.

What is your favourite part of your job?

I love things involving people. I love coaching and training, especially with PhDs. It brings back lots of memories and it’s a reminder of how doing a PhD is lot harder than many people realise.

What would you change about it if you could?

I would make communications training essential at undergraduate and master’s level, way before it becomes absolutely necessary. Many scientists have to go and present at conferences, for example, but few have never had any proper training or support for that. Not only is it then difficult for that person to do the presentation from a technical point of view, it can also be very emotionally draining. Scientists aren’t robots, they are humans and they need help with communication. I would like to make to easier for them to get that help.

Do the skills you developed during your PhD help you in the role?

There are so many things! In particular, I learned how to train interns and masters/ undergraduate students, which really helps me in my current job. Also, I really developed my networking skills through the PhD. The science world is very international, and the Marie Curie scheme encouraged us to interact with other scientists and exchange ideas. It made me see that everything is a team effort and even if someone is not necessarily in your team that you can still help each other out.

Have there been times in your career, possibly when changing roles or when taking on something challenging, that you had feelings of being an imposter or not knowing enough? How did you deal with these feelings?

Yes, all the time! I think I felt it most acutely while I was doing my PhD and also when I was working in TV. I was explaining scientific facts to the public but, of course, you have to double, triple or even quadruple check that you have real sources to back up what you say. In that case it’s good because it pushes you to be rigorous.

In my current role I’m definitely aware that I’m a lot younger than many of the people I interact with in workshops. Going in as a 31-year-old with just a PhD, I often feel I must earn the respect of scientists with a much longer career behind them. I deal with this in two ways. Firstly, by accepting that those feelings are there and not criticising myself for them. Secondly, early on in a workshop I make a conscious effort to display my abilities at understanding and rephrasing participants’ research, which usually helps me to secure my feeling of legitimacy.

What’s next for you, career-wise?

We have some exciting things coming up at Agent Majeur over the next year. We wrote a book called SELL YOUR RESEARCH, based on our method for preparing a science presentation that’s coming out in early 2020. There may be some more TV in the pipeline too, so watch this space. Other than that, I want to stay doing the things I enjoy. France is home for me now and I definitely intend to stay!

What advice or thoughts do you have for PhDs in career transition now?

I think the best way to transition after your PhD is to create networks. The more people you meet and create things with the more likely you are to find what you want to do. I’m quite a shy person so networking is not that easy for me. The way I network is to create things with people rather than just talking to them at events which I find hard. For example, while I was doing my PhD I responded to an ad to make a film with MyScienceWork. I had to force myself to write that first email but after meeting them and creating a bond it got a lot easier. I started to regularly write for their blog leading to some freelance writing work straight after I finished. Opportunities like that led to lots of great things. My final word would be to look after yourself and your health. So many PhD students put their work before everything else. Remember to rest, exercise, sleep and eat well – it can be tough but these things are all so important.