A team of researchers from the Blizard Institute at Queen Mary University of London led by Dr Hemanth Tummala, Dr Amanda Walne and Prof Inderjeet Dokal has identified a new genetic causal mechanism in Dyskeratosis congenita (DC) – a rare and complex haematological condition resulting in the inability of the bone marrow to produce sufficient blood cells. 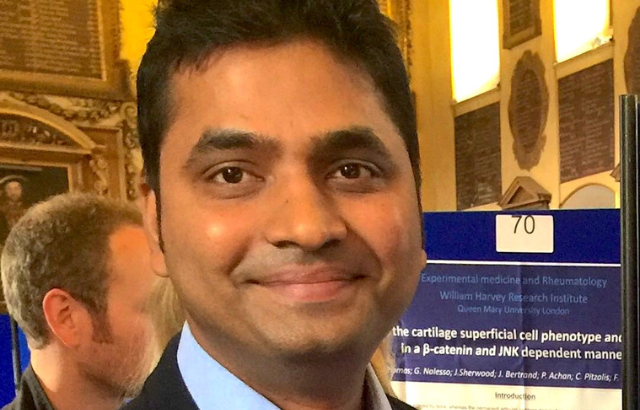 The results describe how the interaction between two neighbouring genes can have an epistatic effect in suppression of one gene by the other, leading to protein deficiency and causing human disease.

The team carried out functional, genetic and biochemical experiments and the results suggested a digenic inheritance pattern of previously unreported or extremely rare germline heterozygous variants in the thymidylate synthase (TYMS) gene and its naturally occurring antisense gene Enolase Super Family 1 (ENOSF1) that are segregating from each parent in a singular fashion. These impact on the overall TYMS protein level in the affected child, where the lack of TYMS protein disrupted nucleotide metabolism and resulted in abnormal telomere shortening in the affected children.

Lead researcher Dr Hemanth Tummala said: “Our study has enabled us to bring into focus a new pathogenetic mechanism for causing a human Mendelian disease. That is, inherited defects in two neighbouring genes, TYMS and ENOSF1, physically overlap on chromosome 18 and operate as a functional unit to control TYMS protein levels.

“We provide direct evidence for this interaction in patient cells and our findings suggest it is the abnormal ENOSF1/TYMS ratio in patient cells that causes severe TYMS deficiency and leads to disease features of dyskeratosis congenita. These results suggest that similar mechanisms could be the cause of other uncharacterized genetic disorders.

“Wider implications also involve cancer treatment where a TYMS inhibitor named 5-flurouracil (5-FU) is used as a drug in chemotherapy. There is data to suggest that genetic changes within TYMS- ENOSF1 locus are associated with severe toxicity (hand-foot syndrome) observed in a subgroup of cancer patients following treatment with 5-FU.”