Congratulations to Dr Paul Vulliamy, clinical lecturer in trauma sciences and specialist registrar in general surgery, on being awarded the Apothecaries’ Prize 2022 by The Worshipful Society of Apothecaries. 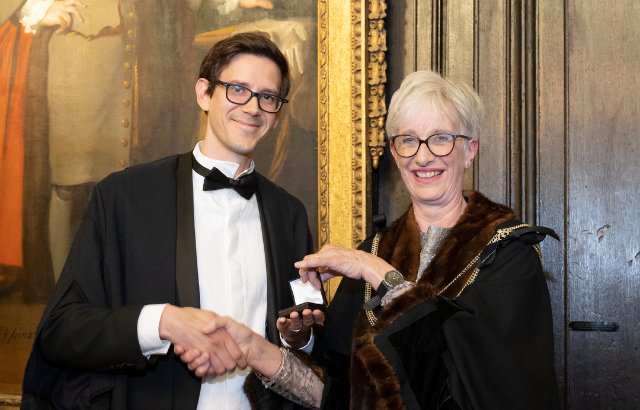 Dr Vulliamy received the Prize, which consists of a medal and £1,000, at the Galen & Farr Awards Dinner on Wednesday 25 May 2022. The ceremony took place at Apothecaries Hall, the City’s oldest Livery Hall (built 1672).The dinner celebrates achievement at the highest level, with four prestigious accolades: the Galen and Farr Medals, the Apothecaries’ Prize, and the Surgeon General’s Award for Excellence in Military Medical Support to Crisis.

The Apothecaries’ Prize is awarded to doctors at pre-consultant level, i.e. within the last three years of training, or, in pharmacy training, those practising at Advanced Stage II of the Royal Pharmaceutical Society's Faculty or similar. Medical candidates will normally be in a specialist registrar training programme. Entry for the prize consists of submitting a published paper in medical therapeutics or public health medicine.

Dr Vulliamy received the Prize for his work on histone-induced platelet ballooning in trauma haemorrhage, published in the Proceedings of the National Academy of Sciences in 2019.

Dr Vulliamy is a member of the Centre for Trauma Sciences (C4TS) at the Blizard Institute, Faculty of Medicine and Dentistry, Queen Mary University of London. His primary research focus is on the role of platelets in the pathophysiology of acute traumatic coagulopathy and post-injury organ dysfunction. He has a particular interest in the immunomodulatory roles of platelets, the mechanisms of damage sensing by platelets, and the behaviour of transfused platelets during major haemorrhage.

He also co-ordinates medical student placements within the Centre and is the co-lead of the Haemorrhage and Coagulopathy module of the Trauma Sciences MSc. He is also the co-principal investigator of the ACITII study, the Centre's platform observational study, and a founding member of the National Trauma Research and Innovation Collaborative (NaTRIC).

The Worshipful Society of Apothecaries is one of the City of London’s ancient Livery Companies, helping to meet Londoners’ health needs since the year 1180. Established in 1617 as an independent Society and becoming the licensing body for doctors in England and Wales in 1815, today the Society is one of the largest of the Livery Companies, drawing its membership from across the professions of Medicine and Pharmacy.

Under its current constitution, 85 per cent of the Society's membership must have obtained a medical qualification registrable with the General Medical Council, or a pharmacist’s qualification registrable with the General Pharmaceutical Council. Membership of the Society's Faculty of the History and Philosophy of Medicine and Pharmacy (established 1959), and of its Faculty in Conflict and Catastrophe Medicine (established 2005), both of which are charities by constitution, is open to the general public.