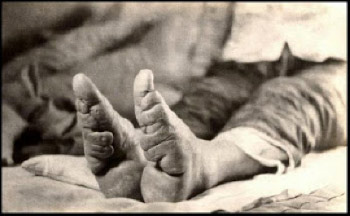 The foot of a Chinese woman. It is shortened antero-posteriorly. The natural concavity of the sole is greatly increased. The bones are compressed and much smaller than their normal size. The toes are doubled down and distorted.

The practice of binding feet in China began during the Tang dynasty (circa 950 AD) and continued as late as the 1870s. I've often heard comparisons of this strange and extreme practice with the modern day wearing of high, uncomfortable shoes by women. In reality there IS no comparison. Foot binding was incredibly painful and quite barbaric and caused long-term, irreparable damage. I mention that because if you do have a slightly queasy disposition then please don't read this post any further! 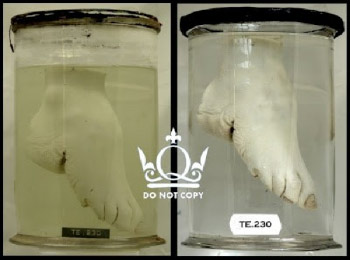 The process of creating these 'Lotus Feet' was started usually in the winter months when feet were numb and slightly less likely to feel pain. It began by soaking the feet of a young girl (around 2-5 years old – before the arch of the foot had a chance to develop fully) in warm animal blood in which herbs had been steeped. Toe nails were clipped, as far back as possible to prevent ingrowth and infection, and then a foot massage was given – possibly as a last attempt at comfort since the next step involved breaking every toe except for the big toe. The arch of the foot was also forcibly broken. This was all done by pressing toes tightly down and into the sole of the foot and then binding them even tighter with bandages soaked into the blood and herb mixture.

The procedure continued with unbinding (every couple of days), re-cutting toenails, soaking the feet to remove necrotic tissue, massaging broken bones then re-binding even tighter. As well as the more obvious problems of pain, the main issue with this techniques was infection due to ingrown toenails: many dropped off and were unable to grow back. Also, with circulation to the feet being compromised then complications such as necrotic flesh were rife. However, this could be considered a benefit as it meant that toes would drop off and 'unwanted' flesh could be removed. In certain instances, girls with fleshier toes or larger feet risked having shards of glass inserted deliberately to cause infection and ultimately necrosis of tissue which could be sloughed away. Unfortunately this form of infection could lead to septic shock and death. 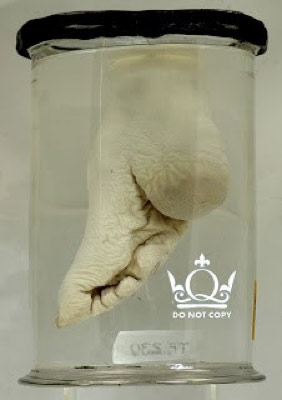 The view from the back: The toes are bent underneath the sole

So why do this? Why was this a practice for nearly 1000 years? It was simply so that a woman could be seen as desirable and 'aristocratic' – the tiny feet meant she couldn't be a labourer (she could barely walk – no chance of her going out to work!) so having lotus feet was a status symbol. Powerful, aristocratic men wanted their wives to have this deformity, and ultimately their daughters would have the process done so that they in turn married aristocratic men.

The special thing about the two pots in our collection is that this soft tissue specimen allows you to see the folded toes under the feet and how they would look in life and the skeletal specimen (no. TE.229) allows you to see the actual internal damage. The picture beneath it is a normal foot from Wiki Commons Images: 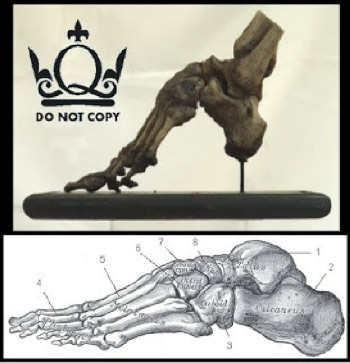 From a pathology point of view this phenomenon is incredibly interesting and further reading will introduce you to information on the dangers of sepsis, the fusing of bones and other associated medical conditions. However it is also worth taking the time to read about the symbolism of these tiny feet, and how they represented the history and culture of the time. How do you think it relates to corset wearing for example, or to the current trends of body modification we see such as tattoos, scarification and others? This article is a good starting point.