Fracture of the Cervical Vertebra
"The base of a skull and the upper three cervical vertebrae, showing a transverse fracture of the body of the axis, just above its lower border. From a native of the West Nile district of Uganda who was hanged for the murder of a warder with a hoe."

In Simpson’s Forensic Medicine hanging is described as “…a form of ligature strangulation in which the pressure of the ligature on the neck is produced by the weight of the body itself.” This means that it need not necessarily be from a high point of suspension and in fact there are several different ways in which hanging can occur.

When considering a typical hanging death, most people will picture bulging eyes and protruding tongue. These are a peri-mortem consequence of hanging, but only usually from a low point. The mechanism which causes these characteristics is asphyxia or suffocation and that is why they are known as florid asphyxial changes. They usually include congestion of the face (which is the redness of the skin caused by blood in the capillaries being unable to drain back to the heart), oedema of the face (which is the swelling caused by excess fluid being forced out of the veins), cyanosis (a blueness caused by de-oxygenated blood in the congested venous system - the congestion and cyanosis together are what can make the face appear purple) and petechial haemorrhages (which are tiny pinpoint bleeds caused by blood being forced out of the small vessels, particularly in the delicate skin in and around the eyes). 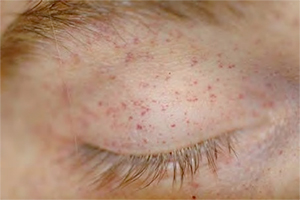 An example of petechiae but not from a hanging death

With this in mind it should now be clear why the eyes and tongue may protrude with the pressure of all this excess fluid. Death will take around 10-20 minutes which is ample time for post-mortem changes to occur.

As mentioned earlier, this mechanism tends to be from a low-point hanging and can include such sad instances as unsupervised children becoming entangled in safety harnesses or toys hanging from cribs; and suicides carried out via attachment to a door knob, kneeling and simply leaning forward.

Conversely, the other form of hanging is from a higher point and that is what specimen C.92 represents. There are several different methods of judicial hanging. This pot is a good example of The Long Drop or “Measured Drop” which was introduced to Britain in 1872 and became the standard method as it was considered the most humane. Unlike previous methods, this one took the person’s height and weight into consideration. It meant that the rope was the right length to ensure a correct and speedy hanging but didn’t result in the decapitation of the victim which did occur frequently.

The desired result was the instantaneous death caused by ‘a broken neck’ or in correct terms the cervical spine being completely disrupted at the 2nd and 3rd cervical vertebrae as in the case below: 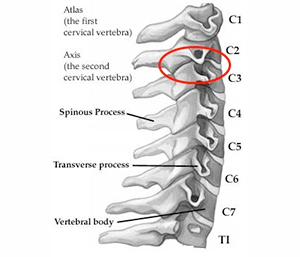 Illustration of a spine

The instantaneous nature of this professional method means that florid asphyxial changes won’t be observed.

It doesn’t just occur in long drop hangings however – this method can also cause immediate death during, for example, road traffic collisions. Below is a close up picture of the first two cervical vertebrae, the Atlas and Axis (you can see that the Atlas is so-called as it is balanced on the shoulders of the Axis, the same way the Titan Atlas held the world on his shoulders in Greek mythology). The part labelled the ‘dens’ is the odontoid process which fractures very easily in whiplash situations and causes instantaneous death like the method above. In the UK, by the time 1926 came around, people were really only hanged for murder – however in the early 19th Century there were 222 hanging offences! They included: stealing a loaf of bread, setting fire to a haystack, impersonating a Chelsea pensioner, vandalising London Bridge, writing a threatening letter, being on the highway with a sooty face and associating with gypsies. Much more information on the procedure in the UK can be found here.