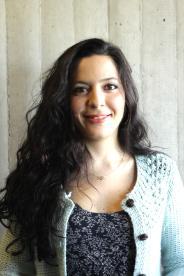 Ozlem  grew up in Cyprus and completed her bachelor in Psychology  at Teesside University in Middlesbrough in the UK and completed a Masters degree in Psychology (clinical emphasis) at University of Nicosia in Cyprus and in Child and Adolescent Mental Health e at the Institute of Psychiatry (IOP) Kings College University of London in the UK.
In 2010 she worked on developing self-harm questionnaire together with Dr Dennis Ougrin when she was based in the Belgrave Department, Kings College Hospital. She then took up a Visiting Research Associate post whilst finalizing her clinical and academic work at Maudsley.
Between 2010 and 2012 she worked with various Non-Governmental Organizations (e.g. Shoreditch SPA-Shoreditch Trust NHS, Netherlands Institute of Higher Education Ankara Turkey) and got involved in coordinating Youth in Action (YiA) projects in Cyprus, in Turkey and in the UK.
In 2013 she took up her PhD post at VU University Amsterdam in 2013 in a research project entitled: “Reducing suicidal ideation among Turkish migrants in the Netherlands and in the UK: Effectiveness of an online intervention”. Her project has been supervised by Professors Ad Kerkhof and Annemieke van Straten in the Netherlands and by Professor Kameldeep Bhui in England.
In 2013 she was awarded with the full tuition scholarship by the Beck Institute Philedelphia, United States and with a grant by the European Commission.
More recently, she has been managing her clinical trial, testing the effectiveness of a culturally adapted e-health intervention for suicidal thoughts for Turkish migrants in the UK and in the Netherlands and she continues her work at QMUL as a honorary researcher.