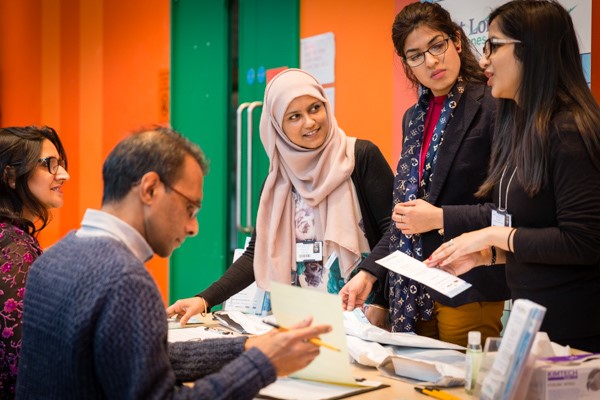 The WIPH study team recruiting participants at a community event.

Combining a genetic risk score with a clinical risk score determined using an existing clinical risk tool (QDiabetes) improved the prediction of type 2 diabetes, which is highly prevalent in British south Asians, who are underrepresented in research. The study used genomic and routine health data from the Genes & Health study of British Pakistanis and British Bangladeshis, including 7599 records with a diagnosis of type 2 diabetes. Researchers found significant genetic differences in type 2 diabetes risk compared with those observed in previous studies on European populations. Of 338 genetic loci associated with the condition that had been identified in European populations, 76 (22.5%) were transferable to this study population. The team then constructed a type 2 diabetes polygenic risk score for the study population. When combined with the routine QDiabetes risk score, the tool improved the prediction of diabetes, particularly in British Pakistani and British Bangladeshi people under age 40. It also predicted the development of type 2 diabetes after gestational diabetes, and was able to elucidate disease subgroups which are linked to differences in the risk of future diabetes complications.

Corresponding author Sarah Finer said: “We hope polygenic risk scores will be adopted in clinical care in the future, after careful evaluation to understand their potential to improve health outcomes cost-effectively, and with diverse populations who are at greatest need.”