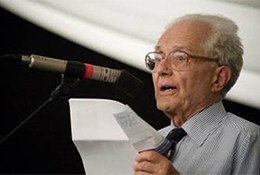 We are extremely sad to have to share with you that Professor Gus Born FRS, one of the founders of the William Harvey Research Institute at Queen Mary and most senior member of our faculty has died peacefully at the age of 97.

Gus was the most wonderful and delightful person, always cheerful and full of ideas and research concepts and a world leader in pharmacology of platelet aggregation.  By demonstrating the chain reaction through his invention of the platelet aggregometer that enables platelets to quickly form a clot, Gustav paved the way for contemporary antiplatelet medicines that have reduced the risk of heart attack and stroke for millions of people.

Brought up in a very distinguished scientific family, Gus was forced by the Nazis to emigrate in the early 1930s from Germany to the United Kingdom. His father Max Born, was an eminent physicist and mathematician who created a fantastic physics department in Gottingen and later received the Nobel Prize in Physics.

Gus was fascinated by biology and after studying medicine in Edinburgh he was then called up as an Army doctor during the Second World War. He served in the Royal Army Medical Core in the Far East.  In 1945 he was one of the first doctors to treat the victims of the atomic bomb in Hiroshima.  Many of those who survived from around Hiroshima were exposed to substantial radiation and Gus observed that they haemorrhaged due to radiation destroying their platelets.

This had an incredible impact on his life and on his return to the United Kingdom, Gustav’s research career focused on platelet function.  He invented the aggregometer to track the speed of platelet aggregation which was taken up by 11 different companies and became used in hospitals. This revealed a positive feedback loop targeted by aspirin and other antiplatelet drugs and in 1987 he was recognised by the highly prestigious Royal Medal.

In 2006 we invited Gus to deliver the John Vane Lecture at the 20th Anniversary of the William Harvey and he gave the most wonderful talk about his life, his friends and his central message to all of us was to 'keep being curious, whatever has grabbed you keep an enquiring mind, and importantly choose who you work with very carefully!'

You can see Professor Rod Flower interview him below.

At an appropriate moment we will hold a celebration of his life with family and friends and inaugurate the Gustav Born Lecture. Our thoughts are with Gus’s family.