Queen Mary University of London and Embassy of Hungary in London mark the 204th birthday of Hungarian obstetrician responsible for identifying the cause of puerperal fever. 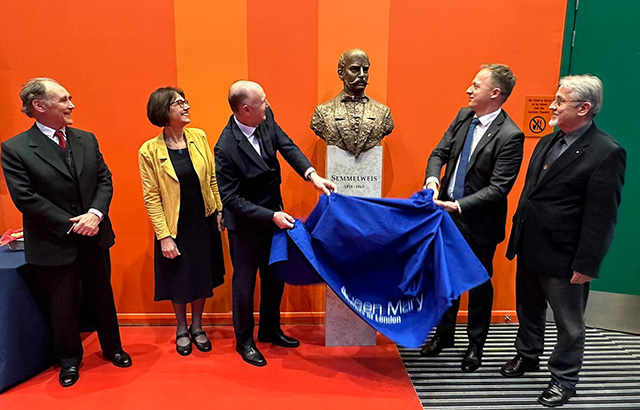 On Wednesday 11th January, Queen Mary University of London and Embassy of Hungary in London held a joint event at Whitechapel Campus to commemorate the 204th anniversary of the birth of Dr Ignác Semmelweis. Known as the ‘Saviour of Mothers’, the 19th century Hungarian obstetrician was responsible for identifying the cause of puerperal fever, pioneering antiseptic procedures and the subsequent significant reduction of mortality at maternity wards.

To mark the anniversary, representatives from the University and the Hungarian Embassy unveiled the first ever Semmelweis statue in a UK medical school.

The celebrations included an overview of the Semmelweis's life by László Rosivall, Professor of Pathophysiology at Semmelweis University Hungary, the work by Hungarian academics in the UK by Márta Korbonits, Professor of Endocrinology at Queen Mary University of London and a reading by Academy Award winning actor Sir Mark Rylance from his recent play 'Dr Semmelweis'. Headlining at Bristol's Old Vic the play explores the struggle of the Hungarian physician to convince the medical establishment about the value of his findings.

Hailed as the ‘Saviour of Mothers’, Dr Ignác Semmelweis was a 19th century Hungarian physician widely recognised as one of the most influential doctors of all time. He identified incidence as a cause of puerperal fever (also known as "childbed fever"), performed experimental animal studies to prove his theories and suggested introduction of antiseptic measures to obstetrical clinics including careful washing of hands with a chlorine solution. Mocked and rejected at the time of his life, these measures were later adopted following discovery of the germ theory saving thousands of lives.