In the past few months, the William Harvey Research Institute at Queen Mary University of London has seen major funding success in the areas of endocrine and inflammation research.

A key highlight is the work of Professor Sussan Nourshargh and her team who are investigating mechanisms of neutrophil trafficking. Neutrophils contribute to the killing and clearance of pathogens as well as initiate inflammation resolution and tissue repair processes. Building on the developing concept of neutrophil heterogeneity in disease settings, and significant mechanistic and pathophysiological data from her laboratory, Professor Nourshargh’s newly funded Wellcome Trust Investigator Award (~£1.9m) aims to acquire an in-depth understanding of one population of disease-inducing neutrophils, namely neutrophils that have exhibited reverse transendothelial cells migration (rTEM). This phenomenon describes cells that initiate diapedesis, engage with endothelial cell junctions but then exhibit retrograde motility and re-enter the vascular lumen. Professor Nourshargh’s team was the first to detect this response in inflamed mammalian tissues in vivo and has now acquired ample evidence to show its alignment with remote organ damage, most notably in lungs. Collectively, building on the team’s track record, expertise, and unique ability to investigate neutrophil-venular wall interactions by high resolution 4D confocal intravital microscopy (see Figure), the newly funded project aims to fully decipher the pathological role of rTEM neutrophils, in particular in ageing. Crucially, the findings are highly amenable to therapeutic targeting and thus could lead to the development of drugs aimed at reducing life-threatening complications of diseases, most notably in aged individuals. 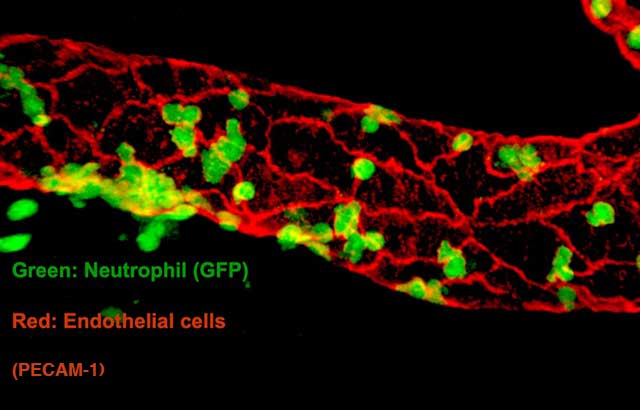 In parallel with the above, and in an exciting new collaboration with the teams of Professor Paul Martin and Dr Helen Weavers at University of Bristol, Professor Nourshargh’s newly funded MRC Programme grant (~£1.6m with ~£860k aligned with QMUL) aims to identify new genes involved in regulation of myeloid cell breaching of venular walls. This work will employ a model of immune cell diapedesis in Drosophila (developed by the Bristol teams) and take advantage of the genetic tractability of the system to identify new molecular players in this response. Key candidate genes will then be explored in murine models of inflammation in Professor Nourshargh’s lab (e.g. model depicted in Figure) and extended to in vitro models incorporating human cells. Collectively, the work aims to employ a multi-disciplinary, cross-institutional and multi-organism approach to uncover novel molecules with important functions in immune cell extravasation.

Professor Nourshargh, Head of the Centre for Microvascular Research said: “I am grateful for the continued support of the Wellcome Trust and now the MRC. These awards endorse the quality and hard work of the whole team of whom I am immensely proud. In particular, I would like to thank my post-docs Anna Barkaway and Loic Rolas for their massive contributions to the strong preliminary data that ensured the success of these recent awards.”

Professor Mauro Perretti, Dean of Research and Research Impact at QMUL’s School of Medicine and Dentistry said: “These prestigious awards are testimony to the world-leadership that WHRI scientists have in the areas of inflammation and endocrine research, awards that are complemented by high-quality papers and significant contribution at international conferences. The common denominator remains ‘therapeutic innovation’: how can we identify new targets? How can we better use therapeutic strategies for patient benefit? How can we better dissect the pathogenic tissue to envisage innovative therapeutic approaches? Altogether these awards, and more in general the research conducted in the Institute, are aligned with the cutting-edge science we want to produce at Queen Mary.”