Success for WHRI at the International Conference on Bioactive Lipids in Cancer, Inflammation and Related Diseases

Scientists from 21 countries travelled to St. Petersburg, Florida, USA last week to attend the 16th International Conference on Bioactive Lipids in Cancer, Inflammation and Related Diseases, which is sponsored by the Eicosanoid Research Foundation. 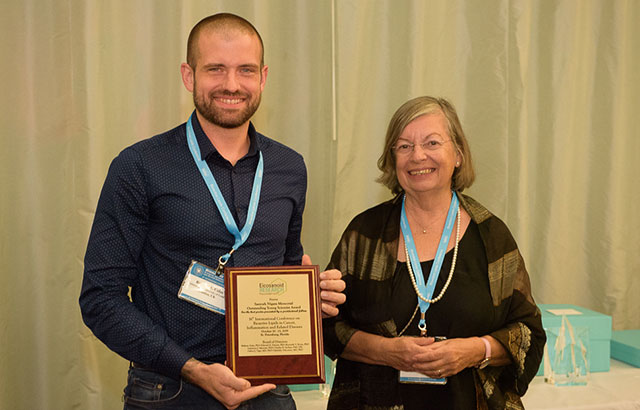 Romain Colas, Ph.D., a Postdoctoral Fellow at Queen Mary University of London was the recipient of the highly competitive Santosh Nigam Young Scientist Award for Postdoctoral Fellows for his poster presentation, “Pro-Resolving Mediator Profiles in Cerebrospinal Fluid are Linked with Disease Severity and Outcome in Adults with Tuberculous Meningitis”.

This competitive award was established by Renate Nigam in memory of Dr Santosh Nigam, one of the founding members of the Bioactive Lipids conference series and member of the Eicosanoid Research Foundation. A Scientific Organizing Committee screens the nominations and selects the list of finalists before the conference. Dr Colas was nominated for this competition by his mentor, Jesmond Dalli, Ph.D. at the William Harvey Research Institute.

At the gala awards dinner, Dr Colas was presented with an engraved plaque and a monetary prize of $500.

The Bioactive Lipids meeting series has been held in a variety of international cities since its first meeting in 1989 in Detroit, with subsequent locations in Berlin, Hong Kong, Boston, Montreal, Seattle, Budapest, Puerto Vallarta and more.

The goal of this 30-year meeting series is to promote the exchange of existing knowledge from around the world, fostering new research ventures and interdisciplinary approaches. It provides a forum for the dissemination of the latest scientific information on bioactive lipids in health and disease as it relates to cancer, inflammation, and inflammation-associated diseases such as cardiovascular, diabetes, hypertension, psoriasis, Alzheimer's, neurological function, dermatological conditions, etc.