A joint international study led by researchers at QMUL explores how variants that might be overlooked in standard analyses can be pathogenic when combined with much rarer disruptive changes. 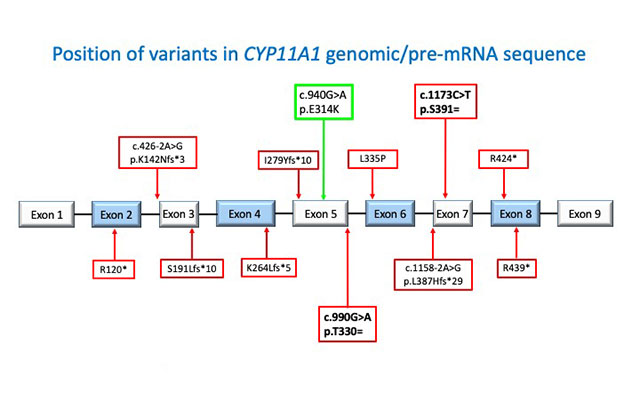 Position of variants in CYP11A1 genomic/pre-mRNA sequence found in a series of patient with adrenal insufficiency.  The relatively common variant that was seen in all patients (green) and other, rarer variants seen in the patients (red).

They found that a “relatively common” change in a gene called CYP11A1, predicted to be benign, was linked to the disorder and is actually pathogenic.

Lou Metherell, senior author and Professor of Endocrine Genetics at Queen Mary said “Usually in this rare disease the genetic changes we find are also ultra-rare but the change we see is relatively common, especially in Europeans (present in ~1 in 200 of the population worldwide but about 1 in 120 in Europeans). We found it to be very common (1 in 5) in our patients which prompted us to investigate its pathogenicity.”

Avi Maharaj, first author and PhD student in the Centre for Endocrinology said: "Although the glucocorticoid deficiency can be easily treated with hormone replacement, it is important to define the underlying genetic cause as some gene defects cause problems in other organs too and this allows us to monitor patients and identify and treat these at an early stage. It also helps with assessing the inheritance risk to enable accurate genetic counselling. For example, in this case, the gene affected is CYP11A1 which can cause infertility since the hormones from the ovaries or testes can also be deficient.”

The importance of early diagnosis is highlighted in a follow up paper, in the European Journal of Endocrinology this year, describing the diagnostic odyssey of three Scottish brothers in whom the underlying cause was only identified in adulthood.

These findings show that a relatively common and predicted “benign” variant in CYP11A1 is a major contributor to adrenal insufficiency, especially in European populations. These observations have implications for personalized management and in the wider context demonstrate how variants that might be overlooked in standard analyses can be pathogenic.