In a new study, published in the journal Nature Communications, researchers from Barts and The London School of Medicine and Dentistry at Queen Mary University of London observe that the promotion of synovial fibroblast senescence activates tissue protective mechanisms in the arthritic joint. 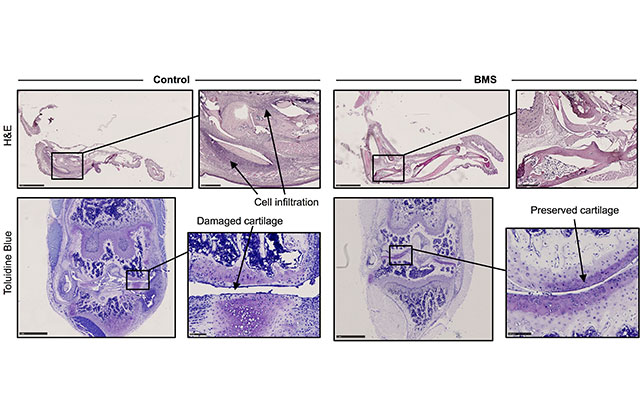 Using a combination of experimentations with primary cells from patients, omics analyses, cellular and molecular work together with a model of inflammatory arthritis, they provide evidence that activation of a specific receptor provokes fibroblast senescence and attenuates the disease in the joints.

The findings are a surprise on several levels. First, it is the first time that the activation of a single receptor (and not DNA damage, oncogene mutation or aging) is associated with induction of cellular senescence. Second, the evidence shows that senescence can be a positive process in the arthritic joint by reducing the level of inflammation which is partially caused by hyperproliferative fibroblasts. Thirdly, a genomic signature activated by a specific agent to ‘reprogram’ the diseased fibroblast was identified.

The study provides proof-of-principle that a totally novel mechanism, induction of fibroblast senescence, could be beneficial to control joint arthritis. This new approach, based on the biology of the resolution of inflammation (affords a novel way to control chronic pathologies, that is by enabling a reprogramming of the diseased tissue or organ. Harnessing the biology of pro-resolving mediators and receptors can pave the way to a new class of therapeutics christened ‘resolution pharmacology’.

“We focused on the arthritic joint, but theoretically this approach could be valid in other settings characterised by fibroblast aberrant proliferation including fibrosis. Another implication entails the ‘druggability’ of the proposed target that could spawn drug discovery programmes. We also provide initial pharmacogenomics analysis on different patient cell lines. Our data indicate that novel anti-arthritic therapies depicted on this mechanism could be effective in sub-group of patients, depending on the genetic variant of the receptor expressed by each patient. Further development may lead to a precision medicine approach whereby drugs developed out of this research will be tailored on the patient characteristics.”