New insights into mechanisms of immune cell trafficking in inflammation

A new study led by researchers at Queen Mary University of London has identified the intracellular catabolic recycling system, Autophagy, within endothelial cells as a new molecular mechanism to limit inflammation. 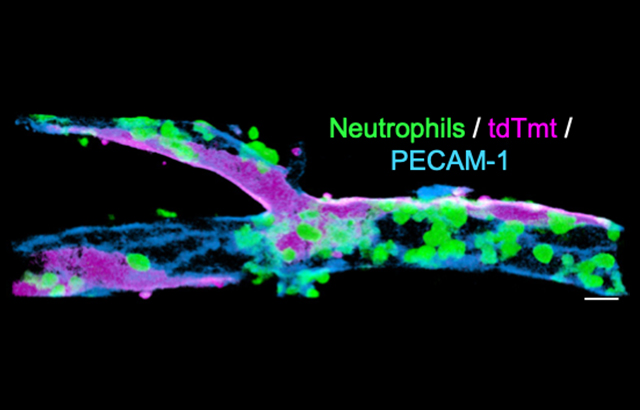 Inflammation is a complex biological response that is initiated by the body’s defence system to protect the host against harmful agents or heal itself after an injury. During this process, immune cells (such as neutrophils) move from the blood circulation to sites of infection or injury. In order to reach inflamed tissues, neutrophils are required to breach endothelial cells that line the inner layer of blood vessels. This process involves the interaction of neutrophils with specialised molecules expressed on the surface of endothelial cells, in particular at sites between adjoining cells. This study from the laboratory of Professor Sussan Nourshargh (CMR website, Centre for Microvascular Research), published recently in the journal Immunity, reports on the involvement of endothelial cell autophagy in regulating the amount and localisation of these key molecules. As such, the work reports on a novel regulatory mechanism in controlling the exit of neutrophils from blood vessels.

The research was conducted using a variety of in vivo methodologies to study neutrophil infiltration into inflamed tissues and the architecture of inflamed blood vessels, including numerous advanced and highly specialised microscopy techniques.

Study author Dr Natalia Reglero-Real said: “A key finding was that endothelial cells exhibit increased autophagy (a process cells use to clean up damaged or unnecessary cellular components) at the same time as neutrophils migrate out of blood vessels. Remarkably, when autophagy was genetically deleted from endothelial cells, neutrophils migrated through the endothelial cell layer more quickly and in higher numbers, leading to local tissue damage.” Since in physiological inflammation neutrophil migration needs to be tightly regulated to avoid collateral tissue damage, the findings of this study are important as they identify autophagy in endothelial cells as a new mechanism for limiting excessive neutrophil migration into inflamed tissues.

Dysregulated tissue infiltration of immune cells is a hallmark of chronic inflammatory disorders including multiple cardiovascular, neurodegenerative and autoimmune diseases. The results reported in this study offer the induction of endothelial cell autophagy as a potential therapeutic strategy to prevent acute neutrophil-mediated tissue damage and hence suppress onset of chronic inflammation. Furthermore, since autophagy is compromised in aged individuals, the findings are relevant to pathology and control of ageing-associated disorders.

Funded by a Wellcome Trust Investigator Award to Sussan Nourshargh.