The Centre for Experimental Medicine and Rheumatology (EMR) at the William Harvey Research Institute is committed to engaging with the public and has participated in the Barts and Queen Mary Science Festival for a number of years, offering children the opportunity to try gloves that simulate the effect of arthritis and to ‘see’ inside their joints using ultrasound, so when QMUL Arts and Culture asked for proposals for the 2019 Tate Exchange EMR decided to build on this and submit a project. 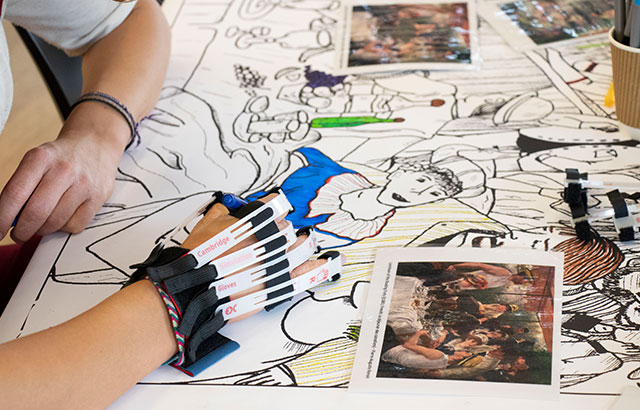 The team, led by Dr Felice Rivellese, Edoardo Prediletto and Dr Daniele Mauro, and supported by Dr Alessandra Nerviani, Gaye Hadfield, Isabelle Garvey and Jo Peel,  were delighted following the announcement in November 2018 that “Creating without constraint: Arthritis and art” was one of the seven QMUL projects selected.

Months of planning followed to produce a display highlighting the work of artists who continued to be creative despite having arthritis. Renoir and a modern-day artist named John Pickering both had Rheumatoid Arthritis (RA), and talks were given by artist Rebecca Ivatts in front of the famous artwork ‘The Snail’ by Matisse, who had osteoarthritis, followed by a discussion on the collaboration between Rebecca and John Pickering.

During the workshop, which took place on 12th - 16th June 2019, many volunteers from EMR helped visitors to put on the gloves and perform ultrasounds. The team were also thrilled to have members from the National Rheumatoid Arthritis Society attend each day to support the project.

By using art as a powerful tool to convey a message along with live engaging activities, the workshop helped to raise public awareness on the impact of arthritis on daily life.

Dr Gaye Hadfield said: “An underlying message from EMR was that since Renoir’s time research has significantly improved the lives of those with RA, and we are still working to make things even better.”

“It was a very different experience for researchers to work with artists, and a huge effort to deliver the workshop when the team were all also doing their ‘day jobs’ but it was very rewarding.”

"It makes me so happy that you are doing this event, it helps give me more confidence”