Thursday 7th April is World Health Day. This event, organised by the World Health Organisation is an annual event dedicated to promoting the benefits of good health and wellbeing worldwide. Many people do not associate Physics with healthcare but the science is vital for many advancements in medicine, including medical imaging. To mark the occasion, 1st year BSc Theoretical Physics student Shiksha Teeluck wrote about advancements in medical physics and how they are used today. 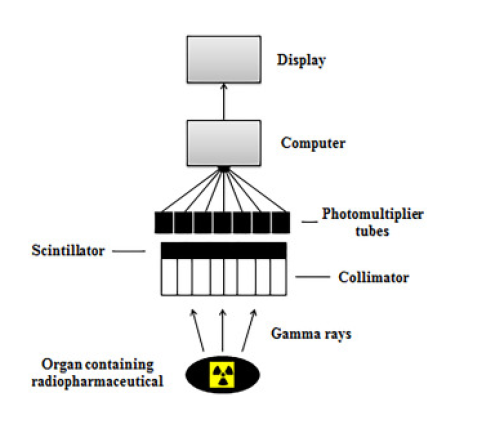 Flowchart of the gamma camera operation

From the early works, in the 17th Century, of experimental medicine by the renowned physician Sanctorio Sanctorius to the present day, medical imaging has played a pivotal role in accelerating and refining healthcare. More specifically, it is thanks to groundbreaking concepts in Medical Physics (which is universally defined as the ‘physics applied to the understanding of the human anatomy and radiation safety’) that have enabled physicians across the world to ameliorate their understanding and detections of harmful illnesses.

Let’s examine the foundations of the innovative concepts that have shaped the medical imaging commonly available today. One of the most well-recognisable forms of medical imaging is the X-ray. X-rays were first developed in 1895 by the German mechanical engineer and physicist Wilhelm Conrad Röntgen whilst he was studying the phenomena of passing an electric current through a discharge tube for gases to emit light. During the late evening on the 8th November 1895, Röntgen discovered that if the light was completely blocked from the discharge tube in a dark room, a barium platinocyanide coated plate would become fluorescent when placed in the same path as the rays. Further investigation displayed that when his wife’s hand was placed in front of the plate, shadows were created due to his wife’s bones being less permeable to the rays. Unknown at the time, these rays were produced when high-energy particles were abruptly slowed in a target (the target in this case was the wife’s hand). When the particles transferred the energy as they moved through the discharge tube, some of the energy was lost by the particle as a photon of ‘bremsstrahlung radiation’ (which roughly translates to ‘brake and radiation’). At a miniscule level, this form of radiation was a direct result of the interaction between the particle and the electrostatic field close to the nucleus.The particle’s given energy decelerates in direct relation to the square its atomic number (Z) of the absorber source, the number of unit charges on the particle (z) and in inverse relation with the mass of the particle (m), this means that the intensity of the bremsstrahlung relates between the charged particles/materials such that Zz/m. This theory highlights the fact that particles with a smaller mass and high atomic number are much better producers of bremsstrahlung than those particles with a high mass and small atomic number. Since soft tissue adheres to the characteristics of the better producers of bremsstrahlung and the fact that the maximum energy of the bremsstrahlung will equal the maximum energy of the particle (causing the particle to lose all its energy in one interaction known as the continuous spectrum), this couples with the observation made by Röntgen. He named these rays as X-rays.

Following on from this discovery, X-rays have become one of the most important diagnostic tools used in medicine. It is fast, painless and does not breach the privacy of a patient, whilst allowing doctors to make correct diagnoses in order to put the patient on track to treatment and recovery. Though the image quality of the X-ray check film is poor at orthovoltage X-ray energies, they are sufficient enough in providing the right amount of exposure factors and processing to produce the maximum best image at: an improved penetration (greater depth in dose), reduced skin dose, more sharply defined beams (narrow outer region of a shadow cast by an opaque object) and reduced bone absorption. These advantages allow doctors to produce a radiograph at a low voltage (reduces the scatter generated) and exposure (also known as reciprocity: the response to the total exposure that is proportional to the tube current and exposure time), thus enabled to cope with the increasing demand in the healthcare atmosphere.

It is highly important to note another recognisable form of medical imaging, known as radioisotope imaging. Also called a radionuclide scan, this form of imaging involves using radioisotopes of tracer quantities for diagnosis of disease in the bones, organs and other parts of the body. One of the earliest uses of radioisotopes was the isotope I (131) to investigate thyroid disease in the 1930s. The radioactive decay of isotopes leads to the emission of alpha, beta, gamma and x-ray radiation with dependence on what radionuclide is used. X-ray and gamma rays penetrate the tissue and at energies above 100keV, photon interactions in tissue are dominated by Compton scattering (scattering by a charged particle, typically an electron, resulting in a decrease in energy). Some influential diagnostic tools that are used in conjunction with the radioisotopes include the Gamma camera.

The Gamma camera is an instrument used to observe the distribution of an isotope (mostly
the tracer technetium-99m as it has a relatively long half-life) in an organ/other part of the body. The camera uses planar static imaging (2D imaging also known as planar scintigraphy) to obtain information from the radioisotope images. The gamma-ray detection position is determined from the radioisotope source and produces an image by collimation (bringing the light ray lines parallel by using pin-hole collimators/converging collimators/electronic collimators) to define the proton direction. A very large diameter crystal receives the gamma ray photons from the patient through a grid of several holes drilled parallel to each other in a thin lead plate to minimise background radiation (known as a multihole collimator). An array of collimators is required to project different photon energies. The vast majority of gamma cameras use a thin, large area single scintillation crystal which emits a blue-green light when a gamma photon makes contact with the scintillator. The light photons travel through a hexagonal arrangement of photomultiplier tubes, which are then processed through a resistive-coupled network to provide positional information based on the outputs from the photomultiplier tubes. Using the relative intensity of the signals from the network to determine the x, y position of the scintillating material, four further signals are generated (x+,x-,y+,y-) to produce an image onto a computer/cathode ray oscilloscope. The total intensity of the signal (z) can be denoted by:

The overall process and mechanism of the gamma camera can be defined as the ‘Anger
logic’.

The performance of the gamma camera is defined by these characteristics: spatial resolution (sharpness of image), sensitivity (counts per second), uniformity (variations in count rate across the field), spatial distortion and linearity (reproduction of radioactive distribution to form a linear image), energy resolution (variations of absorption peaks) and field size (maximum field view of camera). It is crucial the note that gamma cameras can display and analyse the function and processes of the body unlike the X-ray, which enables doctors to have the capability of a more detailed understanding of complex organs such as the brain.

Additionally, it goes without saying that diagnostic ultrasound is undeniably another form of medical imaging that has contributed to the revolutionisation of medical imaging in the evolving healthcare environment. First designed in 1956 in Glasgow as a prototype used to identify flaws in ships, the ultrasound scan has had a colossal impact in its use in the clinical environment. Similiar to X-rays, it is incredibly useful for medical imaging as it can penetrate and interact with the body, however it differs with X-rays as when it interacts with light, it refracts and reflects at interfaces between different media, whilst also being non ionising and non invasive, being a longitudinal wave, having coherent radiation (constant phase relationship between two electromagnetic waves) and having a frequency greater than 20kHz (greater than the frequency of human hearing). One component of the scan is the transducer. It has the function to convert applied electrical signals to pressure waves that propagate through a medium and generate an electrical replica of any received acoustic wave (waves that are propagated by compression and decompression). The design of the transducer provides one with the control of its system resolution and variation and is usually comprised with the components of: a connector, shielded plastic case, tuning (filters out low frequency vibrations of the element and manipulates charge for the best compromise between sensitivity and resolution), live connection, earth connection, shaped piezoelectric element (cut from lead zirconate titanate/plastic which permanently polarises the element across its thickness) and matching layer (attempts to overcome the mismatch of the acoustic impedence Z- physical property of the tissue - between the element and tissue, to augment the efficiency of energy transfer). The transducers operate by the piezoelectric effect. The effect consists of piezoelectric crystals vibrating as a direct response to an alternating voltage. When these crystals are placed against a patient’s skin and motorised at high frequencies, ultrasound pulses are generated and these pulses that travel around the human body. The pulses travel around the body and reflect back to the source. The returning signal steers the crystals in the reverse direction and produces an electronic signal that is processed to formulate the image desired. It is possible to adjust the frequency of ultrasound making it particularly useful in determining abnormalities such as pleural effusions (water in the lungs using a frequency at 10-750 kHz) or issues in the eye (as it has a low attenuation using a frequency of 7-15MHz).

Judging by the mechanisms of only just a few pioneering examples of medical imaging, the future of healthcare seems likely to spiral into further innovation that was started by the most well known medical instruments mentioned above. Radionucleotides are being developed into even more highly sensitivity scans such as positron emission tomography (PET) scans, which have the ability to produce higher quality images in a shorter time and with a much lower dose of tracers. Ultrasound scans are being improved to produce 3D images and X-rays could someday be printed onto any suitable surface and curved to wrap around the patient’s body for a more accurate image.

At the end of the day, the concepts of medical imaging will continue to be metamorphosed, redefined and evolved as the world of healthcare continues to flourish along with the increasing aging population.