Queen Mary researchers were part of an international team interpreting ground-breaking results from the Parker Solar Probespacecraft, which has flown closer to the Sun than ever before. 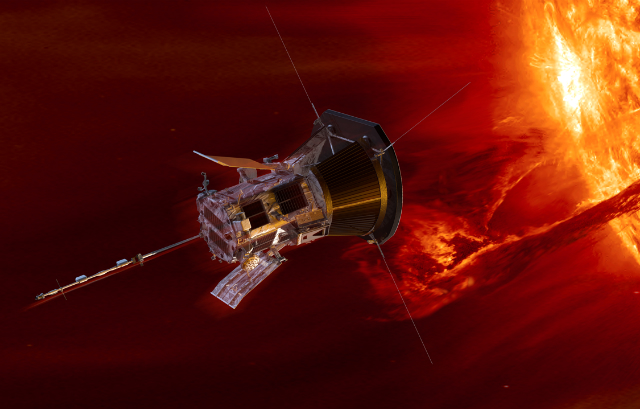 Initial data from Parker Solar Probe, NASA’s mission to ‘touch’ the sun, has begun to answer some of space’s biggest mysteries by exploring the solar wind near to its origins.

The research team found the solar wind encountered by the spacecraft originated from holes in the Corona, the Sun’s outer layer.

Dr Chris Chen, Lecturer in Space Plasma Physics at Queen Mary University of London and co-author of the study, said: “One of the long-standing questions in space physics is where on the Sun the slow solar wind originates from.

"Here the spacecraft was able to study the source of a slow wind stream, travelling at around 400 kilometres per second, up close for the first time. Using data from instruments on board the spacecraft we were able to show that this solar wind emerged from a small region of the Sun, known as a coronal hole.”

The findings were published online in the journal Nature in one of four papers explaining the first results from the Parker Solar Probe mission.

The solar wind is formed from charged particles that escape from the corona, the outermost part of the Sun’s atmosphere, and are accelerated into space.

Until now, most measurements of the Sun have been made from afar, at 1 astronomical unit, the distance from Earth to the Sun. But as the solar wind changes during its journey to Earth, remote observations have left scientists with many outstanding questions about its origins and behaviours.

By taking a look at the solar wind closer to the Sun, scientists have found that it is more dynamic and complex than originally thought.

"The first three encounters of the solar probe that we have had so far have been spectacular," said Stuart Bale, lead for the FIELDS instrument on the Parker Solar Probe from the University of California, Berkeley and Visiting Professor at Queen Mary.

"We can see the magnetic structure of the corona, which tells us that the solar wind is emerging from small coronal holes; we see impulsive activity, large jets or switchbacks which we think are related to the origin of the solar wind; we see instability -- the gas itself is unstable and is generating waves on its own. And we are also surprised by the ferocity of the dust environment in the inner heliosphere."

The new insights delivered by Parker Solar Probe’s first encounter will help physicists to understand more about space weather and its potentially damaging effects to our society here on Earth.

The Parker Solar Probe has so far reached a distance of around 24 million kilometres from the Sun, 16% of the Earth-Sun distance, and is expected to continue to make new discoveries over the next five years as it moves much closer.

Dr Chen said: “Over the next few years the spacecraft will get closer and closer to the Sun, down to a distance of less than 10 solar radii from the surface, and will reach within the solar corona – the atmosphere of the Sun – becoming the first spacecraft to do so.

“From the data collected there we hope to answer fundamental questions, such as how the corona is heated to temperatures far hotter than the surface of the Sun, how the magnetic structure of the Sun connects out into space, and how space weather events are generated. The best results are yet to come.”