A team of researchers from the QMUL Cosmology & Relativity group have been admitted to the LIGO Scientific Collaboration, the global organisation leading the detection and interpretation of gravitational wave events. 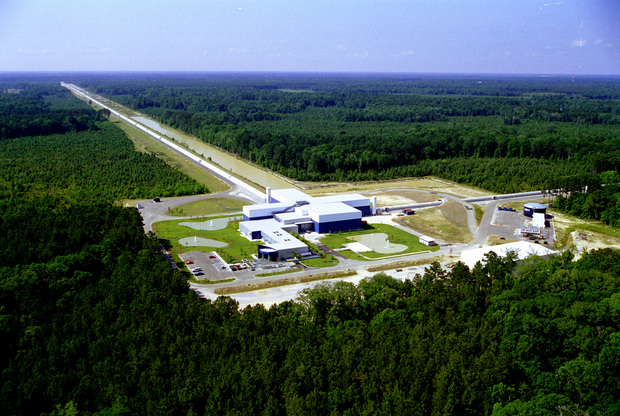 The LIGO Laboratory operates two detector sites, one near Hanford in eastern Washington, and another near Livingston, Louisiana. This photo shows the Livingston detector site.

Over a century ago, Albert Einstein realised that his famous General Theory of Relativity — now our standard theory of gravity — held an incredible prediction. It predicted that spacetime itself could carry propagating waves, much like waves on the surface the ocean. These waves could be produced by only the most powerful events in the cosmos, such as the Big Bang itself, or the collision of ultra-dense objects like black holes.

Last week a team of researchers from QMUL Astronomy Unit, led by Dr. Tessa Baker, were admitted as members the LIGO Scientific Collaboration (LSC). This will enable them to collaborate with scientists from around the world to learn more about these incredible astronomical events, and put them at the forefront of the nascent field of gravitational wave astronomy. In particular, Baker’s group will bring to the collaboration their expertise in cosmology and probing the fundamental nature of gravity. These are two areas where it is hoped that the new gravitational wave observations can shed light on unresolved questions, such as: what is the value of the Hubble constant, the most important parameter in cosmology? Is Einstein’s theory the fully correct description of gravity in the universe?

The formation of the new LSC group at QMUL is timely, too. The LIGO detectors operate in observing runs lasting up to a year, and preparations are currently underway for their fourth observing run, due to start in December 2022. With improved sensitivity, the detectors are expected to discover more gravitational wave events than ever before. Baker’s team are excited to be a part of this effort and to take on the unique scientific opportunities ahead of them.