Astronomers from the School of Physics and Astronomy are members of an international team that has found a planet in orbit around the second-closest star to the Sun, known as Barnard's star. 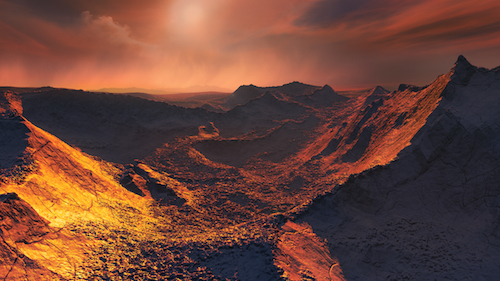 Artist's impression of the surface of Barnard's star b. Credit: ESO/M.Kornmesser

The international team of astronomers that made this discovery was co-led by Dr Guillem Anglada Escudé and also included Prof. Richard Nelson and research student John Strachan, all members of the Astronomy Unit in the School of Physics and Astronomy.

They have found strong evidence for the existence of a planet, known as Barnard's star b, having a mass around 3.2 times that of the Earth and orbiting Barnard's star once every 233 days. The planet, which lies at the snow line around the star where volatile compounds such as water condense into solid ice, is likely to be a cold, desolate world, with a surface temperature around –170 degrees Celsius and conditions wholly unsuitable for life as we know it. However, if the planet has a substantial atmosphere, its surface could be significantly warmer and possibly more hospitable to the development of some form of life — a tantalising thought, and something that further observations will want to test.

Barnard's star is a well-studied example of a type of faint star known as a red dwarf. Its feeble light emerges in the red part of the spectrum, so the sky on the planet would look very different from what we are used to on Earth. Despite being quite different from our own Sun, red dwarf stars are considered to be the most likely places to find planets and therefore the best places to look in the search for life elsewhere in the Universe.

For the full story, and links to more images, see here.