Jointly organised by the Departments of Modern Languages and Comparative Literature, this seminar series aims to create a space for conversations about translation in the widest sense of the word – translation as an encounter between two or more cultures as well as languages, and translation as the cultural transmission of concepts as well as words. 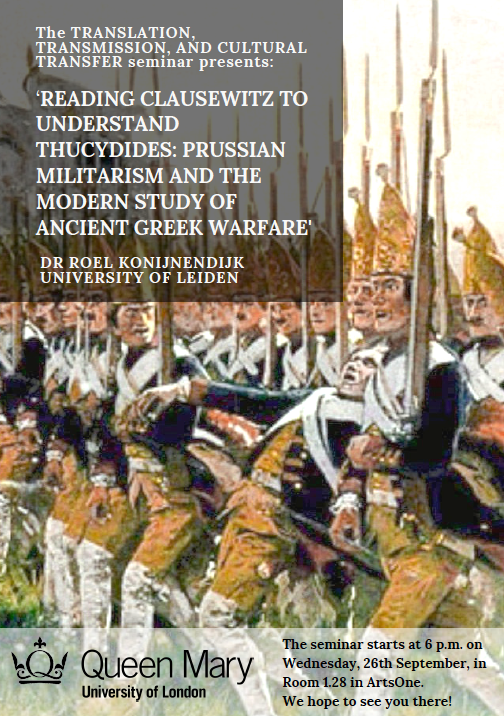 We are looking forward to welcoming our first speaker, Dr Roel Konijnendijk (University of Leiden), on Wednesday 26th September.

Dr Konijnendijk will talk about Ancient Greek military history and its German translations.

Abstract: The earliest academic experts in the field of Ancient Greek military history were Germans with often close ties to the military, and they studied the subject from a very particular perspective. They understood warfare through the lens of Prussian professionalism, the military academy, and 19th-century technology. But the Greeks they studied were amateurs, who had no professional army or officer class or military theory. The result is that these German scholars felt compelled not just translate and interpret sources from Greek to German (and, in the case of their Anglophone successors, from Greek to English), but to translate them from the imprecise and open-ended language of the citizen-soldier to the specific terminology of modern military textbooks. An important element of the way we now (mis)understand Greek warfare is this distortion that lies at the foundation of all our theories.

The seminar will take place in ArtsOne 1.28. Refreshments will be provided, and an evening meal/visit to the pub is likely to follow.

The full programme of the seminar series can be found here.