This pioneering MA programme will enable you to integrate the practice and theory of documentary film and develop your voice as a documentary filmmaker. You will learn about the many forms, discourses and approaches of the documentary, drawing upon the current research of prominent filmmakers, theorists and historians.

In the first and second semester the teaching for the MA in Documentary Practice comprises taught modules with lectures, screenings, seminars and independent production work. There will be roughly two days of sessions scheduled across the teaching week. In the summer students will undertake the Film Studies Research Project, an independent project that combines academic research and production work, and which is co-supervised by a practice-based tutor and a member of the research team. 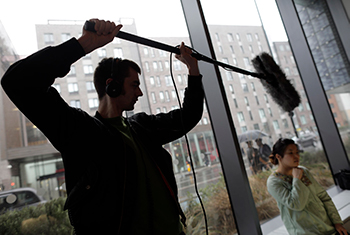 The MA is made up of a range of 30 and 60 credit modules totalling 180 credits overall.

The practice-based teaching on the MA in Documentary Practice is undertaken by specialist staff. The core course is taught by research academics who are leading figures in their fields; specialisms include film philosophy, film history and national cinemas.

The department of Film has run practice-based modules with a production element for several years. There is an established undergraduate BA Hons Film Studies programme with production work in fiction, documentary and scriptwriting.