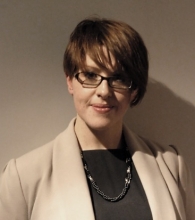 I am currently Director of Graduate Studies for the department, and am Co-Investigator on a large AHRC grant, ‘The Legacies of Stephen Dwoskin’s Personal Cinema’ (£969,985,  2018-2021). This is a collaborative project with academics at the Universities of Reading, Glasgow and Sheffield, the British Film Institute and the LUX, incorporating film history, embodiment and disability studies, fine art practice and the digital humanities. Dwoskin was a multidisciplinary artist who was both one of the founders of the London Filmmaker’s Co-Operative (now the LUX), and an early adopter of digital film.

I work on two distinct areas in my research: one is on orientations of phenomenology and embodiment, including film-phenomenology, feminist phenomenologies, disability studies and critical race studies. My first monograph, Phenomenology and the Future of Film: Rethinking Subjectivity Beyond French Cinema (Palgrave Macmillan: 2012), and my subsequent work on feminist film phenomenologies and complex embodiment relate to this. In 2018 I joined the editorial board of MAI: Journal of Feminism and Visual Culture. I have written extensively on female filmmakers and artists such as Agnès Varda, Chantal Akerman, Shirin Neshat and Gillian Wearing, and transcultural and intermedial filmmakers such Abbas Kiarostami, Philippe Grandrieux and Elia Suleiman, discussing documentary, fiction and hybrid film, as well as artist’s moving image and installation.

My other area of research is on the intermedial relationships between the moving image and archives, museums and other cultural sites. Between 2015 and 2017 I was a member of the AHRC-funded International Research Network on Film and the Other Arts: Intermediality, Medium-Specificity, Creativity on this topic. My next monograph, Cinemuseology: Museum Vitrines, Digital Screens, and Cultural Politics examines this subject, and I have been invited to speak internationally on ethnographic film, performance and live art, and moving image installation in museum contexts.

Art writing and creative non-fiction are ongoing interests, and they go hand in hand with my work as a curator and programmer, where I have collaborated at the Southbank Centre, King’s College London, and the Whitechapel Gallery. I have collaborated with artists, writers, poets and curators including So Mayer, Aura Satz, Daria Martin, Anna Cady, Ricarda Vidal, Helen Sear, Gareth Evans, Chris McCabe, and many others in the exhibitions and programmes I have worked on.

From 2017-18 I was the second ever Senior Academic Lead for Equality and Diversity at Queen Mary, and was extensively involved in reviewing EDI governance, targets and strategy at Queen Mary, which have subsequently been wholly restructured. I still advise from time to time on EDI matters at institutional and local level.