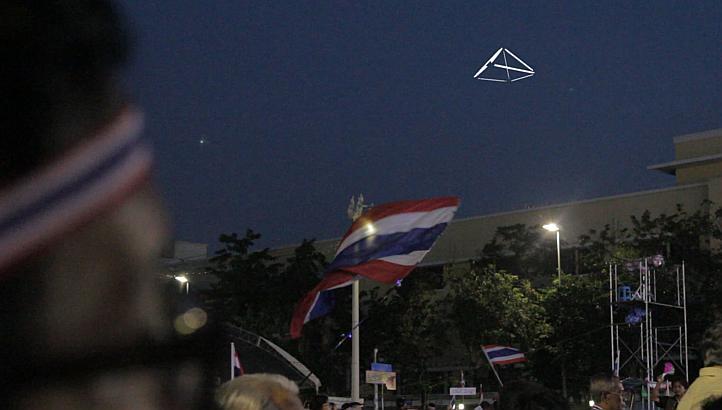 There are two screenings. The first is at Rich Mix on Saturday, 4th October, 1.45pm-3.15pm. The second is at Khalili Theatre, SOAS, on Friday, 10th October, 7pm-9pm. The ticket booking link is at the end of this webpage  http://www.seaartsfest.org/events/under-the-different-sky-thai-short-film-artist-video-showcase-2014/

About the event:
Since Thailand is in different time zone than the UK, the sky is different here. We are six, and sometimes seven, hours apart. One is in the morning, while the other is already in the afternoon. There are many Thai love songs written about the different timezones by using the sky as a metaphor. Having said that, even in the same country, one can live under the different sky too – not in the sense that the weather is that different across the country, but in the sense that each living being inhabits in its own world, or as the famous biologist Jakob Von Uexkull called it, the umwelt. To put it another way, we may sit in the same room, but we live in a totally different world.

Under the Different Sky is a showcase of Thai short films and artist videos, most of which have been exhibited in Thailand in the last year, but never before exhibited in London. The themes and stories are vary dramatically, which is just another reflection of the disparate worlds in which each of us lives. The curator purposely chose this wide variety of film themes to show the diversity of the moving image practice in Thailand in 2014. Some of these films were made for the Thai Short Film and Video Festival, the biggest film festival in Thailand, while others were made for specific screenings, such as a traveling film campaign, a crowd-funding project (which is rare in Thailand) and gallery-based work. Two of the gallery works were taken out of their original installation, and were given a new life under the different sky – here.