We were honoured to have Professor Ben Hutchinshon deliver our first departmental research seminar of 2016. 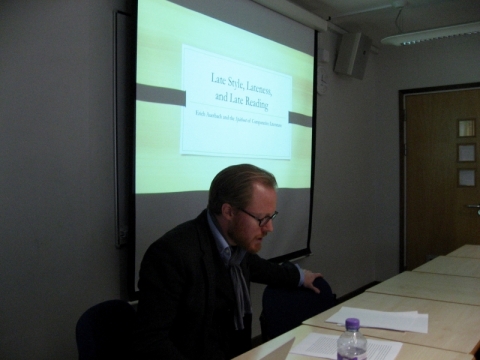 He spoke about reasearch which forms part of his forthcoming book on the notion of 'lateness' in modern literature and critical thought. His paper 'Lateness, Late Style and Late Reading' reflected on the discipline of Comparative Literature as it developed in the post-war period. Building on recent work on lateness, he focused on Erich Auerbach's 'Philology of World Literature' as an example of neither close nor distant reading, but rather of an historically contingent category that Prof. Hutchinson terms 'late reading'.

Many thanks to Prof. Hutchinson and all those who attended for a lively and thought-provoking discussion.