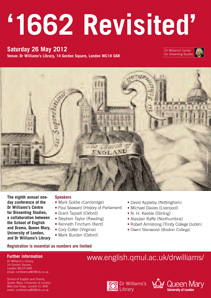 On Saturday 26 May 2010 the Centre’s eighth annual one-day conference was held at Dr Williams’s Library to mark the 350th anniversary of the 1662 Act of Uniformity, the consequent ‘Great Ejection’ of beneficed ministers, schoolmasters and university fellows, and the creation of the nonconformist tradition.

The day’s programme took a broad view of these events. It considered episcopalian and separatist, as well as nonconformist, perspectives; it understood ‘English’ history as part of ‘British’ history by taking in Ireland and Scotland; it recognised the importance of European and transatlantic relations by including the Netherlands and New England in its scope; and it included literary discussion of the developing genres of autobiography, memoirs, and historiography.

Papers by twelve speakers were arranged in four panels:

‘The Power of the Civil Magistrate in the Settlement of Religion’ by Mark Goldie (University of Cambridge),

‘Clarendon and the Politics of Uniformity, 1660-62’ by Paul Seaward (History of Parliament)

Religion:
‘The Re-Establishment of the Church of England 1660-63 Revisited’ by Stephen Taylor (University of Durham) and Kenneth Fincham (University of Kent)
‘Going Dutch: Beyond Black Bartholomew’s Day’ by Cory Cotter (University of Virginia)
‘Edmund Calamy, John Walker, and the Concept of the “Ejected Minister” ‘ by Mark Burden (University of Oxford)

Literature:
‘ “All things to all men”: Interpreting the Farewell Sermons of 1662’ by David Appleby (University of Nottingham)
‘ “The silencing of God’s dear Ministers”: John Bunyan and his Church in 1662’ by Michael Davies (University of Liverpool)
‘The Great Ejection in Nonconformist Memory’ by N. H. Keeble (University of Stirling)

The Three Kingdoms and the Colonies:

Some seventy delegates filled the hall at the Library to capacity and engaged in lively and searching discussion of these topics throughout the day.

The following collection of essays arising from the conference was published in 2014: Settling the Peace of the Church: 1662 Revisited, ed. N. H. Keeble (Oxford University Press)