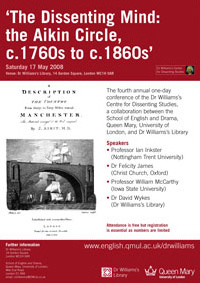 On Saturday 17 May 2008 the Centre’s fourth one-day conference was held at Dr Williams’s Library on the subject of the dissenting mind: the intellectual and scholarly contribution made by dissenters to English society in the eighteenth and nineteenth centuries. It focused on the Aikin family—that remarkably gifted provincial family of dissenters in which every descendant over three generations has an entry in the new Oxford Dictionary of National Biography—together with the circle of intellectuals associated with them. The poet Anna Letitia Barbauld is undoubtedly the best known, but there are entries in the Dictionary for her father, John Aikin senior, tutor at the celebrated Warrington Academy, for her brother John junior, physician, literary critic and editor, and John junior’s children, Arthur Aikin, natural scientist and author, Charles Rochemont, surgeon and chemist, Edmund, architect, and Lucy Aikin, author and historian.

‘How dissent made Anna Letitia Barbauld, and what she made of dissent’ by Professor William McCarthy, Iowa State University