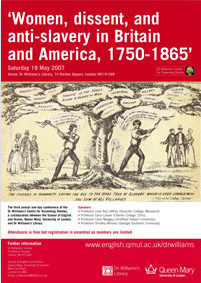 On Saturday 19 May 2007 the Centre’s third one-day conference was held at Dr Williams’s Library on the subject of the role played by dissenting women in the anti-slavery movements in Britain and America. The fifty participants heard four stimulating lectures, two on British and two on American abolitionists, and there was much lively discussion from the floor.