Women in power: what difference does it make? 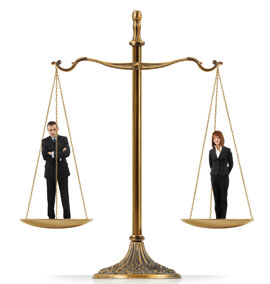 Male politicians have long enjoyed an overwhelming majority – both in terms of the top jobs as well as overall representation. However, successful women are increasingly challenging the status quo, with better representation across the board, as well as a growing number of women reaching top executive positions, from Angela Merkel (Germany) to Ellen Johnson Sirleaf (Liberia).

“Having more women in executive positions is in itself a powerful force for change,” says Dr Rainbow Murray. “It means that people see that it is possible.”

Positive measures such as gender quotas have also played a part. To explore the effects of quotas in more depth, Rainbow Murray compared the 2002 and 2007 French parliaments, looking for the changes brought about by the 50 per cent gender parity law introduced in 2000.

France was the first country in the world to introduce a 50 per cent gender parity law, although that figure remains a goal rather than a reality. After the 2002 election the percentage of women members of parliament rose from 11 to 12 per cent. In 2007, the percentage was 18 per cent.

“This rise in the percentage of women MPs coincided with the re-election of a  right-wing government. This is an interesting result,” says Murray, “because left-wing parties are usually better at promoting gender equality, so a rise in the numbers of women usually occurs with a change of government. The fact that the same party stayed in power gives us the opportunity to study the actual differences brought about by greater numbers of women in power.”

Murray’s comparative study of the parliaments of 2002 and 2007 focused on a number of different areas – such as areas of policy specialisation and membership of committees.

Policy issues have traditionally been perceived to be gendered. “There is substantial evidence that men and women politicians are seen as being stronger on different issues. […] women candidates were positively associated with issues such as childcare, health care, education, the environment, civil rights, and controlling government spending. Conversely, men candidates were positively associated with military spending, foreign trade, agriculture, and taxes.” (p 9-10, Cracking the highest glass ceiling, Ed. Rainbow Murray, 2010)

Overall, across three of these four areas, men and women were represented fairly equally – with the exception of gender equality and women’s rights which, perhaps unsurprisingly, was much more of a popular issue for women across the board.

The area where men and women became divided along ‘traditional’ gender lines was ‘televised questions to the Government’. In this high-profile event, in front of an audience of millions, more women asked questions around traditionally ‘female’ issues.

Murray attributes this change in behaviour on screen to the fact that these questions are allocated by political parties, unlike the other three areas, which stem from the free choice of MPs. She says: “parties try to put forward the most convincing spokesperson on an issue, and they assume – perhaps unconsciously – that women will be more persuasive when asking questions on issues such as welfare or education.”

Murray also looked at membership of parliamentary committees in her comparison of the 2002 and 2007 French parliaments.

Committees dealing with defence, foreign affairs and economics were heavily male dominated, while those dealing with social and cultural affairs had many more women members.

In trying to understand the gender difference in committee membership, Murray noted some interesting committee features: the more ‘male’ committees were seen to be more prestigious; in some instances, they also involved a lighter workload. Meanwhile, the more ‘female’ committees had larger budgets and dealt with issues that had more of a direct impact on the daily lives of the general population.

“Although MPs are initially assigned to committees, they are free to apply to join others if they wish,” says Murray. “This seems to suggest that any imbalance in gender representation is in part self-directed.”

In considering why women would be more interested in sitting on social and cultural affairs committees, Murray noted that MPs’ previous career experience could be a big influencer. Women may be less likely to sit on committees dealing with matters with which they have no direct, previous experience.

She also noted that ambitious MPs may be more likely to sit on a committee that is associated with prestige, yet carried a light workload, leaving time to focus on strategic career building.

This combination of factors led Murray to an interesting hypothesis: “I began to wonder whether women, in electing to sit on less prestigious committees and deal with heavier workloads, were sacrificing their personal ambition over having a greater, immediate effect on constituents’ lives.”