Professor Tilli Tansey opens up new discussion of the past 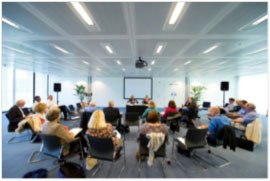 Profound social change, the development of new drug treatments, changes in the way that we deal with chronic illness – all of these things are years in the making and involve large numbers of people working across different fields of expertise. The very complexity of such developments poses a unique challenge to the historian – how can the full story be gathered together to explore the evolution of large scale changes?

With this challenge in mind Professor Tilli Tansey came up with the idea of holding ‘witness seminars’ – a series of fascinating conversations between key players in important social and medical developments. All conversations are recorded for posterity and freely available online.

What is a witness seminar?

Taking a large scale social, scientific or technological change, an important development or a discovery as a starting point, witness seminars pull together the people involved in making it happen – from clinicians, scientists and patients to policymakers and journalists.

All sorts of new connections are made between people who may have been working in the same field, but at different ends of the process. Tilli Tansey explains, “Even in a relatively small field, there are people at either end of the chains of discovery who may be strangers to each other – such as immunologists and psychologists. And because the seminars can cover everything from the cellular level to the structure of society, then these people get to meet and share their accounts of their own histories and involvement.”

Funded by the Wellcome Trust, witness seminars have focused on medical interventions of all kinds, along with their impact on patients and wider society.  Over the years topics have varied widely, documenting The Resurgence of Breastfeeding, 1975–2000, The Medicalization of Cannabis, History of the National Survey of Sexual Attitudes and Lifestyles to name just three. For a full list of all witness seminars, all of which are freely available see: www.history.qmul.ac.uk/research/modbiomed/wellcome_witnesses

Interferon – the inspiration behind witness seminars

Tilli Tansey explains how the idea for witness seminars first came about: “I had organised a meeting at the Royal College of Physicians  that brought together two groups of people – scientists interested in the contemporary history of medicine and historians interested in medicine and science – and the results were really interesting.

“I had invited a Dutch historian to talk about his work on the history of  Interferon which had been regarded as a ‘miracle’ drug in the 1970s. I also invited a number of people I knew who had been involved in the discovery, development and clinical use of the drug, although they were not necessarily the famous names associated with it”

“It became clear during the meeting that the historian who had dedicated three years to a research project  about Interferon was learning much  from the scientists and clinicians who  were key players in his story – though he had never met them, and indeed not heard of some of them. The discussion was very lively. We broke for a glass of wine, then resumed the meeting as there was so much to talk about."

The experience of this meeting got Tilli thinking about the way that history is recorded. She says, “It occurred to me that there was no way of collecting group history – not necessarily a consensus – but a group of people who would necessarily have different points of view. Meeting as a group triggers all sorts of memories and stories that you don’t otherwise get.”

“The name ‘witness seminars’ came from the Institute of Contemporary British History who I was told also gather oral history,” Tilli explains.  “Though I have never been to a witness seminar run by anyone else, so I don’t know if we do it the same way or not.”

A new generation of witness seminars

Arriving at QM in October 2010 with a £700K Fellowship from the Wellcome Trust, Tilli received a major Strategic Award, worth over £1.4 million from the Wellcome Trust – for a project that will continue with this successful approach to contemporary history: ‘the makers of modern biomedicine: testimonies and legacy’.

The seminars are focusing on five broad themes: clinical genetics, global health and infectious diseases, neuroscience, ethics and research in practice and medical engineering and technology. Despite covering specialist subjects, the edited seminars are intended to appeal to a wide audience. And as with previous seminars, all transcripts will be freely available online.

Bringing together the arts and sciences – a unique perspective

In some ways it is not surprising that Tilli has carved out such an innovative role to bring together people from different disciplines. She gained her first PhD on the neurochemistry of the octopus brain and spent several years working as a neuroscientist, before getting a second PhD on the career of Sir Henry Dale, FRS (1875-1968).